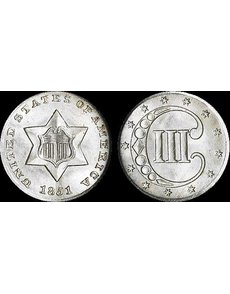 Three-cent coins were unloved when they were first issued in 1851 and not mourned when they were no long produced for circulation in 1889. They were struck in silver and copper-nickel. An 1851 silver 3-cent coin is shown.

Up through the 1940s, plans were repeatedly floated to resurrect the coin.

The denomination was first struck as a tiny fish-scale of a silver coin to facilitate the purchase of postage stamps. Before 1851, mailing a letter up to 300 miles cost five cents, and double that for greater distances. That year rates were reduced — one cent to mail a letter locally and three cents to mail it up to 3,000 miles.

The New York Times reported in 1883: “It [3-cent piece] was created in 1851 under an impression on the part of Congress that without it nobody could buy a postage stamp, and at that time there was some show of reason for such an impression. The copper cents [large cents] then in use were cumbrous things, and there existed a popular contempt for money in small sums which prevented their general circulation. In these circumstances the three-cent postal rate really made a three-cent coin convenient, if not necessary.”

In 1883, the postage rate was reduced to two cents, minimizing need for the odd denomination.

The 3-cent piece, by then a copper-nickel coin, limped along until production ceased in 1889. (The last silver version was struck in 1873; both versions were struck concurrently from 1865.)

However, the coin was barely cold in its grave before schemes surfaced to revive the corpse.

In 1912, Cleveland Mayor Newton D. Baker agitated for the coin’s resurrection, saying it would “establish a small prices for necessities, such as street car fares.” He was joined in his quest by New Jersey Gov. Woodrow Wilson, industrialist Andrew Carnegie and pioneer settlement social worker Jane Addams.

In 1934, U.S. Sen. Arthur Vandenberg, R-Mich, introduced a bill to coin 3-cent pieces at the request of the American Newspaper Publishers’ Association, which sought the coin because most papers sold for three cents then.

In 1938, U.S. Rep. Alfred F. Beiter, D-N.Y., introduced a bill seeking the coinage of a 3-cent piece that would bear “an appropriate design to arouse public opinion for traffic safety.”

None of the efforts went anywhere, but during World War II, the Mint went so far as to produce pattern 3-cent pieces in an experimental effort to conserve copper.

In 1948, Mint Director Nellie Tayloe Ross told United Press the need for the coin died with the production of 1943 steel cents. The pattern’s design, she said, was filed away — until 1948.

In 1948, United Press reported the “design was taken out of the files and put to work as a new [Franklin] half dollar.”