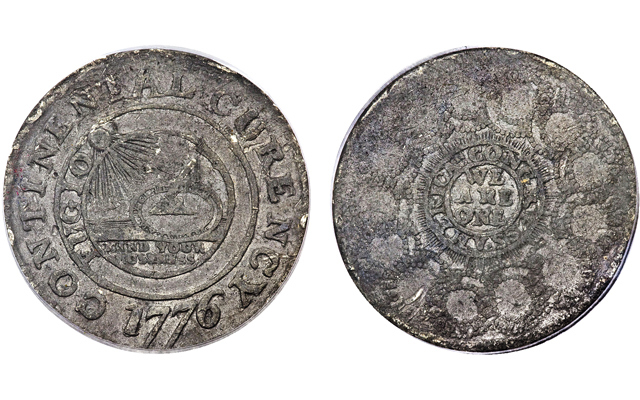 A unlisted pewter 1776 Continental Currency dollar is a recent discovery by Heritage Auctions’ Brian Koller and will be offered by the firm at a Jan. 7, 2015, auction.

The piece, graded Very Fine Details, Edge/Rim Damage by Professional Coin Grading Service, will be offered as part of Heritage’s Jan. 7, 2015, auction in Orlando, held immediately prior to the Florida United Numismatists show, Jan. 8 to 11.

The die variety is considered the first produced Continental dollar, categorized as Newman 1-A Dotted Rings in Eric P. Newman’s 1952 reference on the series 1776 Continental Currency Coinage and Varieties of the Fugio Cent.

The die marriage was previously known only by three examples of the coin composed of brass.

The lot description states, “Newman 1-A has never been as much as rumored to exist in pewter or tin format prior to the consignment of the present piece.”

Mark Borckardt, senior cataloger and numismatist at Heritage, said, “I was absolutely shocked when I saw it.” Jim Halperin, co-chair of Heritage Auctions, placed the piece into the larger perspective of Heritage’s varied FUN offerings, stating, “For the first time ever, a collector can acquire a complete die variety set of Continental dollars in the pewter composition at one time, given that the selections from The Partrick Collection selling that same night includes every other variety of Continental Dollar in all known compositions.”

The lot description explains, “The distinctive feature of Newman 1-A is that the 13 reverse rings, one for each of the former colonies, are comprised of many tiny beads.” These beaded rings were later turned into circular lines. This example has beading on all 13 rings with no hint of the later die modifications to the rings. Heritage adds, “The raised rim is complete on the present piece, which indicates that it was better centered when struck than the three brass examples.”

On his discovery Koller remarked, “I was initially surprised, but wanted confirmation. When Mark confirmed that it was, in fact, a new discovery, I was very pleased.”

Continental Currency coinage remains mysterious and many questions remain, including its denomination, although Newman believes the value to be a dollar.