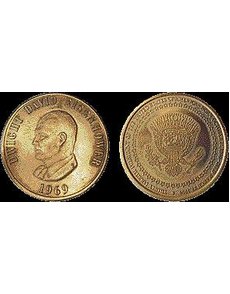 Shown is a numismatic item struck in honor of President Dwight Eisenhower. As the origin of the piece remains unidentified, Coin World readers are asked to provide information.

I have a round that depicts and says DWIGHT DAVID EISENHOWER 1969 on the obverse. On the reverse, it has a circle of stars; his birth and death dates appear outside of the stars. In the center it has a shield and eagle. I can’t find any information on this piece. Can you help me?

Famed U.S. Army five-star general and 34th U.S. President Dwight Eisenhower is depicted on a vast array of coins and medals, perhaps most notably on the Eisenhower dollar of 1971 to 1978.

The piece submitted by Mr. Terrell possesses a bronze-like appearance. The obverse portrait of Eisenhower seems to be a crude derivative of Frank Gasparro’s portrait for the Eisenhower dollar. The reverse has a stylized rendering of the presidential seal.

There seems to be a marking on Eisenhower’s suit collar, possibly an engraver’s mark.

A matching piece, in better condition than Mr. Terrell’s, recently sold on eBay for $12.99.

A search of the Coin World archives turned up a great number of Eisenhower pieces struck in the years following his death, but no exact matches to this example.

Anyone with additional information on this item, such as the engraver or manufacturer, is welcome to contact “Readers Ask.”

I inherited some English coins from my dad’s collection a few years ago. I’m assuming that these coins came into his possession while stationed in England during World War II. One is a 1673 English half penny. Where can I go to find information on English coins?

American participation in two world wars and the Cold War resulted in many world coins being brought back by U.S. servicemen to American shores.

For both history and value of the 1673 coin (and other coins of Great Britain), Mr. Warner should consider purchasing (or borrowing if the book’s price is too steep) a copy of Standard Catalog of World Coins, 1601-1700 by Krause Publications or Coins of England & the United Kingdom: Standard Catalogue of British Coins by Spink.

As well, it might be worth the time and effort to browse completed sales at auction websites on the Internet, such as eBay, Heritage Auction Galleries, Stack’s Bowers and Ponterio and others to get the latest pricing.

Typing “English Coins” or “British Coins” into an Internet search engine will turn up a mountain of coin-collecting websites and discussion boards. Take advantage, but proceed with caution.