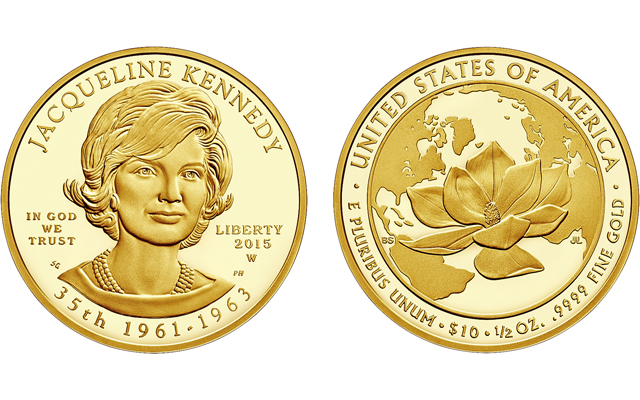 The expected in-stock date disclosed by the Mint on its website is Sept. 1.

As of July 1, the Uncirculated 2015-W version also entered back-order status, with a Sept. 1 in-stock date.

Adam Stump, deputy director of the Mint's Office of Corporate Communications, acknowledged via email June 30 that: "The Mint underestimated the initial demand for the 2015 First Spouse Series One-Half Ounce Gold Coins –Jacqueline Kennedy and, unfortunately, the products went on back order very quickly after sales started. As of June 30, additional product arrived at our distribution center in Memphis that will clear a majority of the backorders. The Mint has resumed production and we expect to fulfill all customer demand in the coming days and weeks. We apologize to our customers for the delay."

Stump further added, "We made an initial quantity, then resumed production because more is needed."

The Mint has imposed a maximum combined authorization of 30,000 coins for the  Proof and Uncircilated 2015-W Jacqueline Kennedy coins. The final mintages for each version will be based on the orders received by the U.S. Mint.

Traditionally, demand for Proof issues is usually 2 to 1 in comparison to Uncirculated versions when both versions of a coin are offered.

Both versions are struck at the West Point Mint.