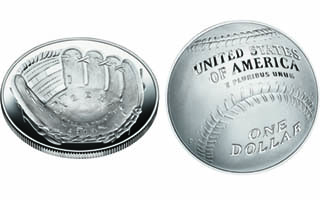 The Jan. 29 presentation at the World Money Fair in Berlin by Ronald Harrigal, senior advisor of manufacturing, will focus on lessons learned from the manufacture of curved coins.

Lessons the U.S. Mint's manufacturing staff learned in developing and producing the 2014 National Baseball Hall of Fame commemorative coins are the topic of a Jan. 29 presentation at the World Money Fair in Berlin by Ronald Harrigal, senior advisor for the U.S. Mint's Manufacturing Department.

Harrigal's address covers the die and planchet preparations needed to produce the maximum Proof and Uncirculated mintages of 50,000 gold $5 half eagles, 400,000 silver dollars and 750,000 copper-nickel clad half dollars.

His presentation focuses on the efforts during the year preceding the sale of the commemorative coins, which included anticipating and developing coin designs and dies, deciding whether to hub or machine dies, and developing packaging.

The curved shape of the coins, with concave obverse and convex reverse, presented the Mint this technological production challenge for the first time. The U.S. Mint reached out to counterparts at the government mints in France and Australia, both of which had previous experience striking curved coins.

Many challenges the U.S. Mint faced can be found detailed here on the Coin World website.