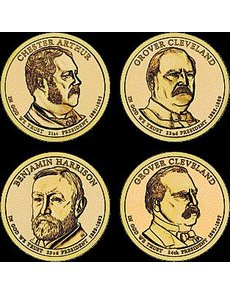 Shown are the designs chosen for the 2012 Presidential dollars: Chester Arthur, Grover Cleveland (first term), Benjamin Harrison and Grover Cleveland (second term). The coins will not be struck for circulation.

The U.S. Mint has released the designs that will appear on the Presidential dollar coins in 2012.

The designs were selected by U.S. Treasury Secretary Timothy F. Geithner, who has the final word on which designs are used.

Inscriptions on the obverse of each coin include the president’s name, the years of his term in office, a number indicating the order in which he served, and the motto IN GOD WE TRUST.

All Presidential dollars bear a common reverse featuring the Statue of Liberty, designed and sculptured by Everhart. Reverse inscriptions include $1 and UNITED STATES OF AMERICA.

The legend E PLURIBUS UNUM, the year of issue and the Mint mark are incused on the edge of the coins.

Production of Presidential dollar coins for circulation was suspended by Treasury Secretary Geithner, Dec. 13. However, Mint spokesman Michael White issued a statement Dec. 14 saying that the Mint would continue to produce Presidential dollars for collectors, who will be able to “purchase them directly from the U.S. Mint during specified periods.”

A call to the Mint for clarification on its plans for pricing and packaging for 2012 Presidential dollars had not been returned as the print issue of Coin World went to press Jan. 6, but the information was published in the Jan. 6 Federal Register, though available too late for Coin World print deadlines. A news article was published at the Coin World website Jan. 7 with the information (www.coinworld.com/articles/federal-register-reveals-pricing-for-2012-pre/).

The first issue of 2012, featuring Chester Arthur, is scheduled for a Feb. 16 release, according to the Mint’s product schedule listing. Mint officials have not announced whether the Mint plans to conduct a launch ceremony for the Arthur dollar.

For up-to-date information on the availability and pricing of products featuring Presidential dollars, visit the Mint’s website at www.usmint.gov/catalog or telephone 800-872-6468. ¦