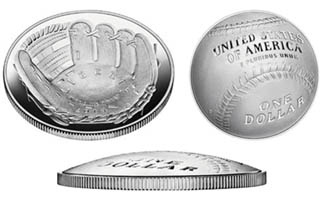 Pricing for the Proof and Uncirculated concave/convex 2014 National Baseball Hall of Fame silver dollar and copper-nickel clad half dollar to begin at noon Eastern Time March 27 have been released by the U.S. Mint.

Pricing for the gold $5 half eagle, which is tied to the price of gold, will be announced closer to the sales date.

The introductory period runs from March 27 through 5 p.m. EDT April 28, after which regular issue prices will be charged.

The pricing for the coins, with the introductory price first followed by the regular issue price, are:

A Young Collectors Set containing an Uncirculated 2014-D National Baseball Hall of Fame clad half dollar will be offered later in 2014.

An hour before the start of sales, the U.S. Mint will host a coin launch ceremony on Capitol Hill in Washington, D.C., featuring Hall of Fame second baseman Joe Morgan from the Cincinnati Reds. The ceremony will be held in the Russell Senate Office Building, Room 328A, which is the main hearing room for the Senate Agricutlure Committee.

Morgan was one of five Hall of Famers who reviewed the proposed designs in the early stages of a public design competition that eventually resulted in the recommendation for the common obverse approved by the Treasury Department.

All of the commemorative coins, in Proof and Uncirculated versions, feature a concave obverse and convex reverse.

Read more about these commemorative coins in the April Monthly Edition of Coin World. Visit the U.S. Mint website at www.usmint.gov for updated information.