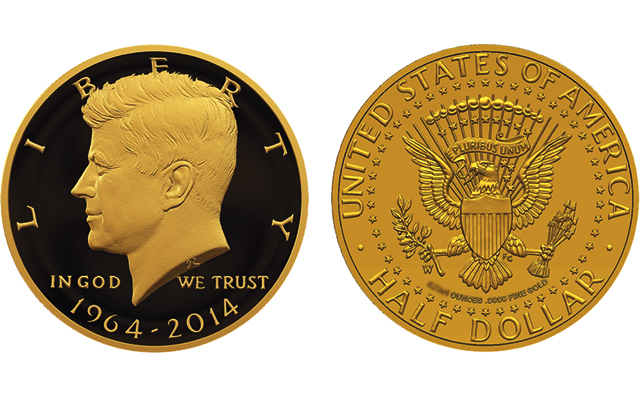 Two of the packaging options will be offered Aug. 5 to 9 during the American Numismatic Association World’s Fair of Money at the Donald E. Stephens Convention Center in Rosemont, Ill.

The products to be offered are:

??A two-coin 2014 50th Anniversary Kennedy Half Dollar Uncirculated Coin set. The set will contain copper-nickel clad half dollars with Uncirculated finish. One coin each will be struck from the Philadelphia and Denver Mints with the P and D Mint marks, respectively. These two coins will be available only in the set. The Mint will first sell this set starting on July 24.

The silver and copper-nickel clad half dollars will bear the single date 2014. The gold Proof coin will be dual-dated 1964-2014.

The obverses of these seven 2014 coins will bear the original higher relief portrait sculpt of Kennedy that U.S. Mint Chief Engraver Gilroy Roberts executed in 1963 originally for a Kennedy medal and that was subsequently adapted for the half dollar in 1964. Assistant Mint Engraver Frank Gasparro’s Heraldic Eagle reverse, as introduced in 1964 and still in use today, will appear on the reverse.

U.S. Mint officials have not disclosed a timetable for the release of each of the Kennedy half dollar products or if mintages will be limited or the coins struck to demand.

The U.S. Mint plans to offer the single gold Proof coin and the two-coin set during the ANA convention, according to Mint officials.

Introduction of the two sets and single gold Proof coin will bring the number of different Kennedy half dollars being struck during 2014 to 13.