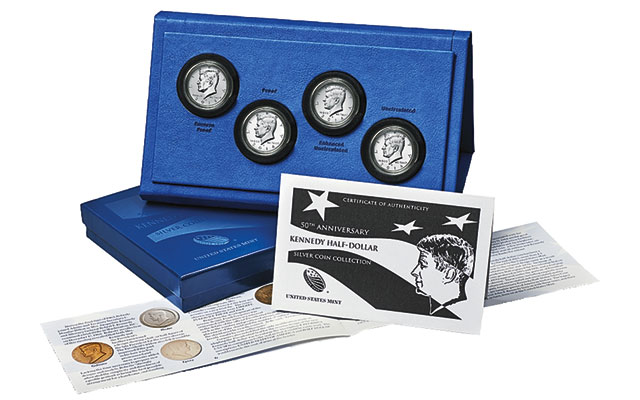 Some collectors reported to Coin World that they received confirmation from the Mint that their orders were shipped within a few hours of the orders being placed.

"We’re obviously delighted over the overwhelmingly positive reaction by our customers to our new order management system," Tom Jurkowsky, director of the U.S. Mint's Office of Corporate Communications, said Oct. 29. "We’ve always expressed our dedication to customer service, and the new eCommerce website is clearly proof positive of that commitment. Many people don’t realize that the Mint is one of the top 100 online retailers in the country, and the order management system we’ve designed and put in place is one that reflects that status. This was a team effort by the Mint."

The $99.95 set contains four .900 fine silver Kennedy half dollars — one each from the Philadelphia, Denver, West Point and San Francisco Mints — each with a different finish. The U.S. Mint has authorized a product limit of 300,000 sets, and a household ordering limit of five sets.

The Mint had 180,000 sets struck, packaged and ready to ship when the product went on sale at noon Eastern Time Oct. 28, according to Jurkowsky.

The new order management system and website debuted Oct. 1, the start of the federal Fiscal Year 2015.