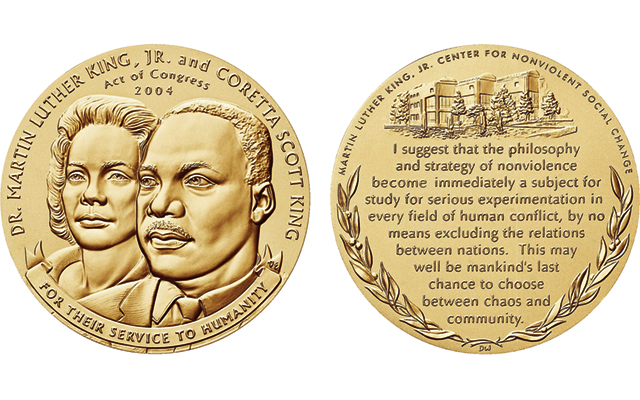 Members of the King family were in attendance at the event.

Bronze duplicates of the King gold medal were offered for sale by the U.S. Mint beginning at noon Eastern Time June 25.

The medal will eventually be displayed at the Smithsonian Institution’s National Museum of African American History and Culture, which is scheduled to open on the National Mall in Washington, D.C., in 2015.

The Gold Medal Technical Corrections Act of 2014, signed into law June 10, 2014, provided for the King gold medal to be formally presented to the Smithsonian on the Kings’ behalf.

The technical correction provides for public display of the King gold medal, particularly at the National Museum of African American History and Culture, or for loan elsewhere, “particularly at other appropriate locations associated with the Montford Point Marines.”

The Commission of Fine Arts approved the proposed designs for the King medal on Sept. 15, 2005. CFA members were informed by U.S. Mint officials at the time of the design submissions that the designs had already been approved by Mrs. King.

The CFA’s approval came with recommended modifications to the reverse design, suggesting removal of the representation of the Martin Luther King Jr. Center for Nonviolent Social Change in Atlanta as being unnecessary.

The Citizens Coinage Advisory Committee outright rejected the proposed reverse, stating the that the martyred advocate of nonviolent protest was deserving of a more dramatic visual representation than the predominantly text-based design the family supported.

The adopted designs for the King medal were approved Dec. 23, 2005, by then Deputy Treasury Secretary Robert Kimmitt.

The obverse of the King medal was designed and sculptured by U.S. Mint Sculptor-Engraver Donald Everhart II. The design features conjoined portraits of the Kings.

The reverse of the King medal was designed and sculptured  by then U.S. Mint Sculptor-Engraver Donna Weaver. Weaver retired as a member of the U.S. Mint’s engraving staff on Jan. 13, 2006. She is currently an artist with the U.S. Mint’s Artistic Infusion Program.

The reverse design features a rendition at the top of the Martin Luther King Jr. Center for Nonviolent Social Change. Inscribed below is I suggest that the philosophy / and strategy of nonviolence / becomes immediately a subject for / study for serious experimentation / in every field of human conflict, by no / means excluding the relations / between nations. This may / well be mankind’s last / chance to choose / between chaos and / community.

Conjoined laurel branches encircle the lower half of the medal’s reverse design.

Since 1973, there have been a number of unsuccessful attempts to pass legislation for commemorative coins honoring Dr. King alone, and for bills seeking medals honoring the Kings together.

The latest attempts for a commemorative coin for Dr. King came during the 108th Congress, between 2003 and 2004.

None of the bills were successful in being passed.

For more information or to order the bronze duplicate King medals, visit the U.S. Mint website or telephone 800-872-6468.