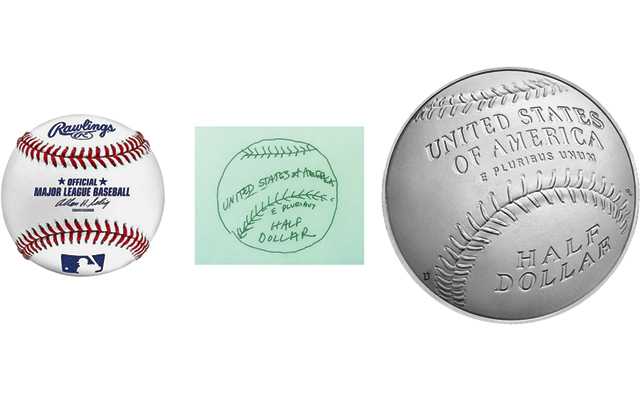 The Baseball coins’ common reverse was mandated to be similar to a Major League baseball, far left. At center is the hastily sketched reverse design candidate executed by U.S. Mint Sculptor-Engraver Donald Everhart II during a Citizens Coinage Advisory Committee meeting in 2013. The design became the sculptured design in coin form, above right.

While the U.S. Mint had never executed a curved coin before, Deputy U.S. Mint Director Richard A. Peterson was confident his staff could meet the challenges and deliver National Baseball Hall of Fame commemorative coins that would draw the interest of collectors and the public.

Ken Meifert, vice president of sponsorship and development for the National Baseball Hall of Fame and Museum, said the Mint went a step further when Peterson included the Baseball half dollar in the curved coin engineering, even though the enabling legislation only required the silver and gold coins bear the distinctive treatment.

Pinder said the Mint’s treatment was considerably better than what he originally imagined. He said he had advised Hall of Fame officials that such a coin proposal “might raise some eyebrows in the process of passage,” but HOF officials embraced the plan."

“In the end, just as with the reverse, the obverse came out much different from what I had imagined, but much better, and the design process got a lot of people involved,” said Joe Pinder, senior staffer for the House Financial Services Committee who drafted the appropriate language for the Baseball coin legislation. “I hope that’s a model for the future of coin design, and that’s not to take anything away from the in-house people at the Mint, who are terrific.”

Pinder had wondered whether the technical challenges to produce a dome coin might be insurmountable.

“Dick Peterson put a lot of effort into making this a real showpiece for the Mint, and he and his team deserve all the credit in the world,” Pinder said. “Importantly, and very easy to overlook, the fact they are making the clad coins domed is perhaps the biggest technical achievement of all. Gold is pretty ductile and so is silver, but the planchets are monolithic and after the technical issues are worked out, fairly predictable. The ‘sandwich’ of cupro-nickel and copper from which clad coins are struck, on the other hand, has every reason in the world to de-laminate if you push the middle of a round out.

“The fact that Dick Peterson took that part of this process on voluntarily and that his staff were able to pull that off, I’m sure will impress people at other Mints,” Pinder said.