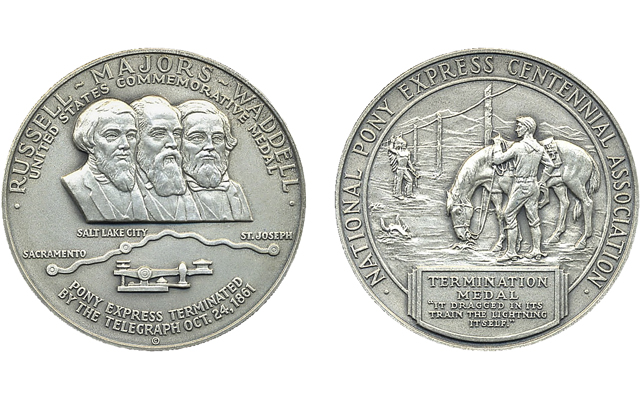 The United States Mint has produced a number of congressionally authorized medals in silver, including this 1961 Pony Express Termination Centennial medal.

With the United States Mint considering an arts medals program proposed by the Citizens Coinage Advisory Committee to include silver issues, perhaps it is apropos to look at other art medals the Mint has issued in silver.

The 1961 Pony Express Termination Centennial medal is one of several medals issued in 1960 and 1961 in different diameters and metallic compositions under provisions of the Act of March 18, 1960, Public Law 86-394, to mark the accomplishments of the Pony Express.

Below is a map of the telegraph line linking St. Joseph, Mo., Salt Lake City, Utah, and Sacramento, Calif. At the bottom is a telegraph key.

The completion of the telegraph line on Oct. 24, 1861, ended the need for the Pony Express service.

The reverse depicts a dismounted Pony Express rider tending to his horse, as the rider looks at a Native American in the background whose hand is raised in greeting. A telegraph line stretches overhead and off into the distance.

The original designs for the medals were provided to the U.S. Mint by Roy J. Olson. The designs were sculptured by Assistant Mint Engraver Frank Gasparro.

The CCAC’s proposal suggests inclusion of .999 fine silver medals for the arts medals program. The program is one of the agenda items for its two-day meeting Sept. 23 and 24.