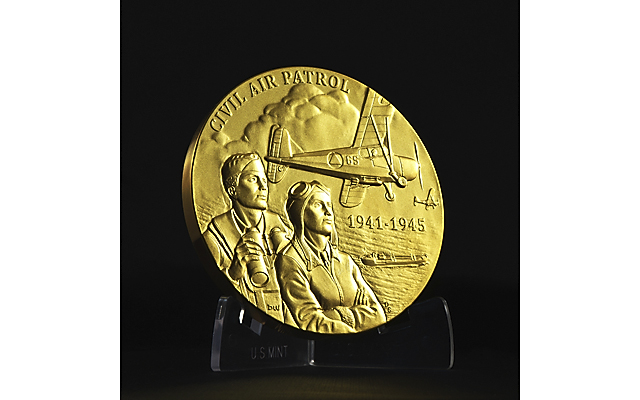 The obverse of the Civil Air Patrol congressional gold medal features a portrait of two members of the CAP in the foreground, one male and one female, with a pair of armed CAP light aircraft flying over an oil tanker at sea in the background. 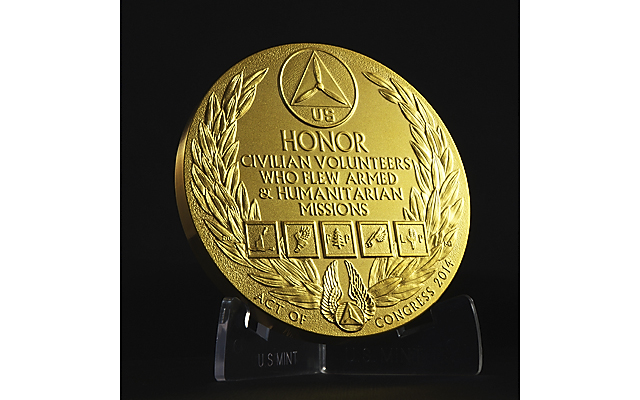 The medal, the designs of which were not made public until the ceremony, is meant to honor the Civil Air Patrol for its "extraordinary humanitarian, combat, and national services" during World War II.

The obverse portrays two members of the Civil Air Patrol in the foreground, one male and one female, looking skyward, with a pair of armed CAP light aircraft flying over an oil tanker at sea in the background. The dates 1941-1945 are engraved on the obverse.

ACT OF CONGRESS 2014 is also included on the reverse.

Read all about the CAP and its history here.

During a 7 p.m. dinner at the Washington area's Hyatt Regency Crystal City hotel, a 3-inch bronze medal will be presented to each CAP World War II veteran, or one family member if the CAP member is deceased.

The obverse and reverse designs were approved by Treasury Secretary Jack Lew.

The Civil Air Patrol congressional gold medal is authorized under Public Law 113–108, signed by President Obama on May 30, 2014.