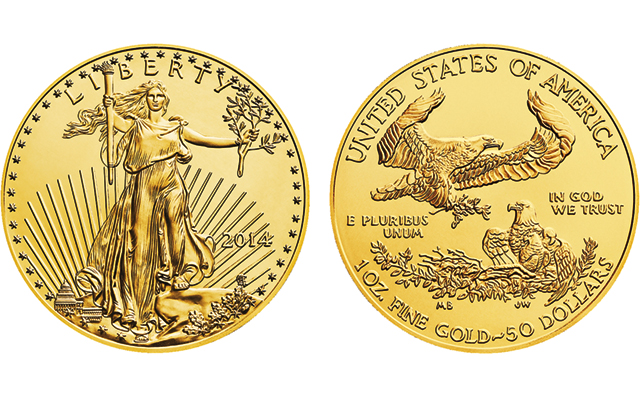 The United States Mint's authorized purchasers bought 29,000 of the 1-ounce gold 2014 American Eagle bullion coins in May, 3,000 more than were purchased in April.

Cumulative sales by the United States Mint of American Eagle 1-ounce gold bullion coins during the first five months in 2014 are down 340,000 coins from 2013 levels over the same period.

Sales of the half-ounce, quarter-ounce and tenth-ounce gold American Eagles are also below 2013 figures.

Gold American Eagle bullion coins are composed of .9167 fine gold; the balance of the alloy is 5.33 percent copper and 3 percent silver.

The bullion coins are struck at the West Point Mint but do not bear the W Mint mark.

The Mint sells the coins to its authorized purchasers for the spot price of gold per troy ounce, based on the London PM fix on a given day, plus a premium.

According to the World Gold Council, demand for gold investment products in the United States during the first quarter of calendar year 2014 was 30 percent below 2013 levels.

“Although sales of Eagle coins by the U.S. Mint indicate a dramatic drop in demand compared with the year-earlier period, this does not take into account imported bullion coins such as Canadian Maple Leafs, or the extent of demand in the secondary market, which was reasonably buoyant,” according to the World Gold Council.