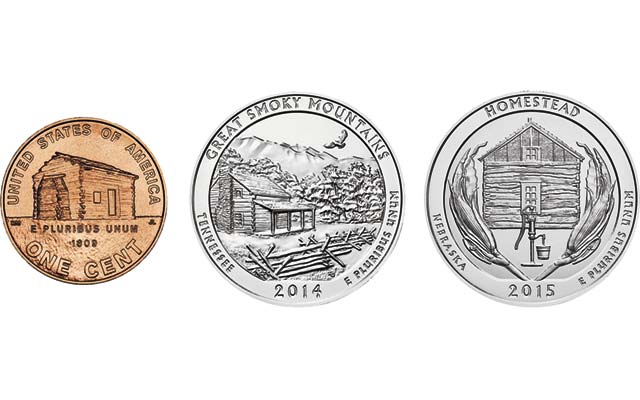 How cool would it be to have your home on a coin?

Abraham Lincoln (kind of), John Oliver and George W. Palmer can make that claim. Their log cabins (or in Lincoln’s case, a reasonable facsimile thereof) have all appeared on U.S. coins in recent years. Everyone knows Lincoln, but Oliver and Palmer never achieved fame. Their humble homes appear on coins because of their location, not the accomplishments of their owners.

In 2009, the Mint struck four Lincoln cents to celebrate the bicentennial of Lincoln’s birth. The first, marking the 16th president’s birth and early childhood, shows a log cabin that for decades was passed off as Lincoln’s birthplace but is now acknowledged as merely “symbolic.” The building, enshrined in a granite and marble neo-Classical temple near Hodgenville, Ky., since the early 20th century, is the concoction of entrepreneur Alfred Dennett.

The National Park Service took the shrine over in 1933 and gradually backed off the claim of authenticity. In 2004, after a tree-ring analysis dated the building’s logs to 1848, the park described the structure as simply symbolic.

George W. Palmer built his cabin on the Nebraska prairie in 1867 and lived there until 1895. The structure, which was used as a home until about 1940, was donated to the Homestead National Monument in 1950.

The building is a centerpiece of the memorial to the nation’s homesteaders.