Unique 1794 Flowing Hair silver half dollar at auction in April 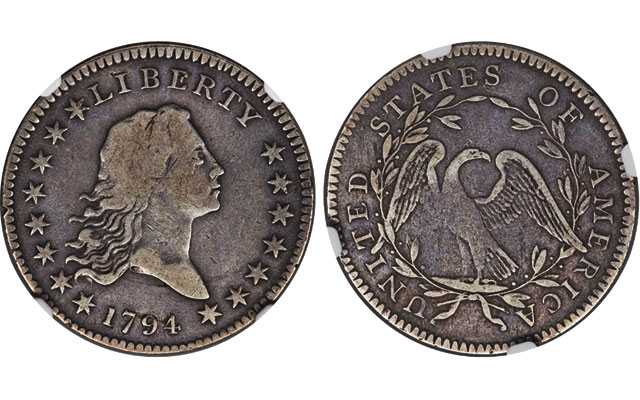 The only known example of the Overton 109 variety of 1794 Flowing Hair half dollar struck in silver will come to auction for the first time in April.

The only known example of the Overton 109 die marriage of the 1794 Flowing Hair silver half dollar is headed to auction.

After decades off the market, that coin will cross the auction block for the first time during Heritage Auctions’ April 22 to 27 sale. The sale is being held in conjunction with the Central States Numismatic Society 76th Anniversary Convention in the Chicago suburb of Schaumberg, Ill.

The half dollar is part of the Liberty U.S.A. Collection, Part II, originally assembled by numismatist and author Robert P. Hilt II, and has been kept off the market until now.

“This die pair was previously known only in the form of two copper impressions; one of which is housed in the Smithsonian Institution, and the other in a museum in Vienna, Austria,” said David Mayfield, vice president of coin consignments at Heritage. “It is an incredible rarity and one that sets the stage for what we think will become a very successful auction event in Chicago.”

The copper pieces are die trials — pieces struck from production dies in the wrong metal (copper, for example, instead of silver). The copper trial pieces were likely struck to test the dies, according to uspatterns.com.

The unique silver O-109 1794 Flowing Hair half dollar, according to the Heritage auction lot description, was unknown to numismatic researcher Al C. Overton for inclusion in the 1967 first edition or 1970 second edition of his reference Early Half Dollar Die Varieties 1794-1836.

Hilt initially described and illustrated the silver example of the O-109 die marriage in his 1980 work, Die Varieties of Early United States Coins. It was first recorded by Overton in the 1990 third edition of his book and carried into the 2005 fourth edition by Donald L. Parsley.

A die variety or marriage is the pairing of two specific dies, obverse and reverse. The methods necessary to create the dies used to strike early U.S. coinage made each die unique; dies can often be distinguished by such details as the placement of the various elements, and the size of numerals and letters in the inscriptions, among other distinctions.

According to uspatterns.com, the Austrian museum copper die trial was discovered in July 2004 in the Kunsthistorisches Museum in Vienna. The copper half dollar is identified by uspatterns.com as having been gifted to the museum in 1920 by an S. Schwarz. It is the third example of a 1794 half dollar die trial discovered between 2003 and 2004, according to the website.

The coin in the CSNS auction was recently graded Very Fine 25 by Numismatic Guaranty Corp.

To learn more about the coin or to consign to the CSNS sale, contact Mayfield by email at David@HA.com or by telephone at 214-409-1277.