Unique half dime to be a cornerstone of August auctions 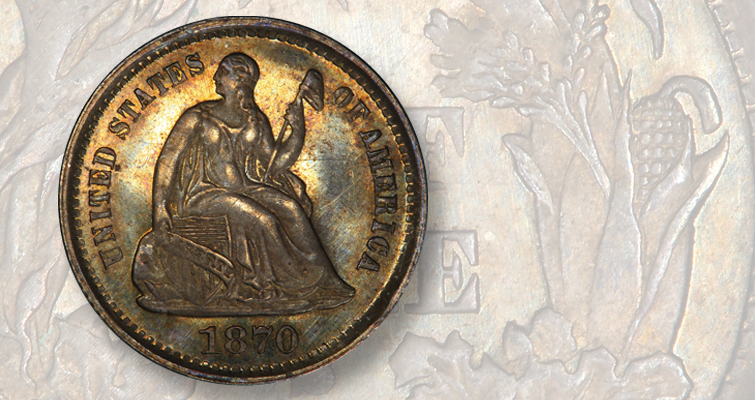 Heritage will offer a unique 1870-S Seated Liberty half dime as part of its 2022 auctions in Dallas, held the week after the ANA World’s Fair of Money.

Article update, June 30: Although Coin World had confirmed that the 1870-S Seated Liberty half dime would be offered at the firm's August auctions and the firm was promoting its appearance at that time, the firm now says that the coin will not be offered until its January 2023 Florida United Numismatists auctions.

Some of the marquee lots from the upcoming Heritage auctions have started to emerge, including a unique 1870-S Seated Liberty half dime that the firm will offer at its Aug. 22 through 28 sessions in Dallas. It is graded Mint State 64 by Professional Coin Grading Service and has a green Certified Acceptance Corp. sticker recognizing quality within the grade.

Bidders will have an opportunity to see the coin at the American Numismatic Association World's Fair of Money, which takes place Aug. 16 to 20 in metropolitan Chicago, through lot viewing opportunities during the show in Heritage’s capacity as an Event Partner for the ANA, a role that it shares with Stack’s Bowers Galleries. The ANA announced on March 8 that GreatCollections would be the exclusive Official Auctioneer of the ANA.

The 1870-S Seated Liberty half dime is a mysterious issue in American numismatics, and its existence was a matter of speculation for a century, given the existence of a unique 1870-S Indian Head gold $3 piece.

The offered half dime emerged in 1978, “discovered in the junk box of a Chicago dealer early that year,” as described at the July 9, 2004, at Bowers and Merena’s sale of Jim Gray’s North Carolina Collection. Then graded Mint State 63 by Numismatic Guaranty Co., it sold for $621,250. That cataloger observed, “Both sides are semi-prooflike in finish with moderately glowing fields evident beneath a rich overlay of original toning. The patina is mostly charcoal-gray in hue, but direct light angles call forth more vivid golden-orange undertones.”

That catalog entry reported that the reverse die of the 1870-S Seated Liberty half dime was used to produce 1871-S half dimes, with a filled S Mint mark, and that the strike was typical of the type, “with overall bold detail that wanes a little over the highpoints of the obverse portrait and the reverse wreath.”

How to price something unique?

Soon after its discovery it was displayed by RARCOA at the 1978 ANA convention and was later acquired by Michigan dealer John Abbott in 1980 for $425,000. Ron Guth wrote in PCGS Coin Facts that, as a unique coin, its selling price was set by adding $25,000 to the $400,000 hammer price of John Work Garrett’s example of the 1804 Draped Bust silver dollar when it was offered at auction in March 1980. Stack’s Bowers sold this Class III Restrike 1804 dollar, now graded About Uncirculated 55 by PCGS, for $1.44 million in 2020.

Q. David Bowers wrote a 1985 article on the issue, published in the Gobrecht Journal, when Bowers and Merena graded the half dime AU-55 while cataloging it for a 1985 auction, an era before third-party grading. It would sell for $176,000 at that auction and sell again the next year, realizing $253,000.

Bowers characterized 1870 as “a year of confusion in San Francisco,” with cramped facilities. A cornerstone for the second San Francisco Mint was laid in 1870 and many speculate that another example of the now-unique half dime might reside here, alongside other 1870-S coins.

“Sloppy records were kept in San Francisco in 1870,” Bowers adds, and the 1870-S half dime is absent from Mint reports. Bowers concluded, “Fame will undoubtedly come to the 1870-S half dime and it will take its place among the great numismatic rarities of United States coinage.

Heritage will present the famed half dime and other pieces from the Bender Family Collection, which will be offered alongside a Branch Mint Proof 1855-S Indian Head gold $3 piece, graded Proof 64 Cameo by PCGS with a green Certified Acceptance Corp. sticker and an 1873 Indian Head gold $3 piece in PCGS Proof 65 Deep Cameo, also with a green CAC sticker. 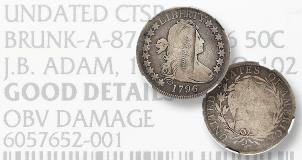 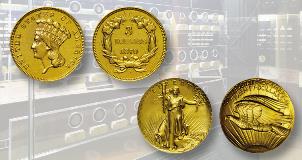 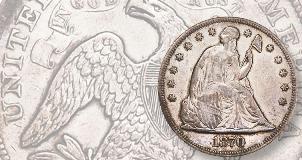