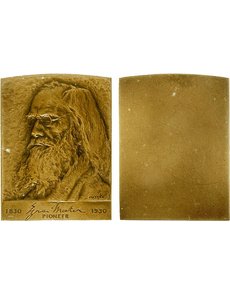 The long-haired, bearded bust on the 66-millimeter by 49.5-millimeter bronze plaquette struck by Medallic Art Co. is identified by facsimile signature as ezra meeker, pioneer, and was the work of a busy sculptor, Jeno Juszko. Meeker was born Dec. 29, 1830, and died Dec. 3, 1928.

He was not an easy man to overlook during his long lifetime. Collectors of U.S. commemorative coins may recall him as a force behind the Oregon Trail Memorial half dollars that were issued from 1926 through 1939.

Born to Jacob and Phoebe Meeker in Huntsville, Ohio, Ezra relocated with his family to Indiana in 1840. He married Eliza Jane Summner in 1851 and with his newborn son headed west the next year on the Oregon Trail. The journey ended with a donation land claim near Puget Sound where he was a founder of Puyallup and became a grower of hops for beer brewing in 1863.

At the age of 76, Meeker began promoting the memory of the Oregon Trail. He created an 1849-style covered wagon with two oxen named Dave and Dandy and set out on a cross-country trek to publicize the trail and the pioneers who traversed it, thousands of whom lie buried along its length.

Ezra raised funds by charging 10 cents for adults and five cents for children to view his rig but was soon a hero in cities and towns before his arrival. He entered New York City after seeking a permit to drive the length of Fifth Avenue, leaving rig and driver at 161st Street to seek a camp site. His driver was promptly arrested for driving cattle on a city street. This situation took 30 days to work out, but at last the pioneer drove his wagon the length of Broadway, crossed Brooklyn Bridge and left New York behind.

Meeker met President Theodore Roosevelt, but failed to land the $50,000 grant for memorials along the trail. His oxen were subsequently mounted by a taxidermist and are on display with his wagon at the Washington State History in Tacoma. He made another ox-trek in 1910 and in 1916 drove an 80-horsepower automobile outfitted with a prairie schooner top the length of the trail.

In 1924, Meeker flew in an open cockpit Army airplane from Vancouver, Wash., to Dayton, Ohio, where he visited Orville Wright. At the time of his death, Meeker was about to embark on yet another drive, sponsored by auto magnate Henry Ford.