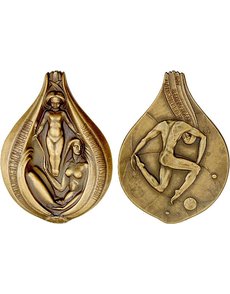 The Horticulture Society of New York’s Medal of Achievement is named for George D. Pratt, a member of the group that sponsored America’s first art medal series, the Circle of Friends of the Medallion.

Many medal enthusiasts are first attracted to this collecting area by the discovery of the wide range of shapes offered by collectible medals. While most medals are circular in shape, many square, oval, triangular, multisided and wholly free-form designs await the interested collector.

Among the most innovative of all shapes and designs must be the Horticulture Society of New York’s George D. Pratt Medal of Achievement for Professional Gardeners, a 1930s award struck by Medallic Art Co. during the firm’s long residence in New York City.

This 76- by 55.5-millimeter bronze medal takes the shape of an opening tulip flower, whose unfolding reveals a nude woman and child symbolizing new life. The petals present the incuse legend george d. pratt medal of achievement — for professional gardeners.

The reverse strongly suggests 1930s science fiction of the Flash Gordon era with its field of stars, planets and circular orbits, an Earth globe floating at lower right. Gamboling over this celestial space is a slim female nude, looking backward toward the viewer with her neck at an impossibly sharp angle, her long flowing locks sweeping upward to the peak of the blossom-shaped field, bearing the incuse name the horticultural society of new york: awarded to: . ad 19--.

The medal bears no artist’s signature, and the only example observed bears no recipient’s name. The right edge shows a tiny incuse maker’s name, medallic art co. n.y. It seems remarkable that no sculptor signed this extraordinary work.

The award is named for a true Renaissance man, George Dupont Pratt (born 1869, died 1935). During a long career, Pratt pursued interests in both the arts and sciences. He was prominent in the leadership echelon of the Metropolitan Museum of Art, American Museum of Natural History, Brooklyn’s Pratt Institute, the New York State Conservation Commission, Boy Scouts of America and the American Forestry Association.

He appears in my book American Art Medals, 1909-1995, released in early 2011 as the first in an American Numismatic Society series devoted to medals and medallic art. The book notes that Pratt was a member of the group that sponsored America’s first art medal series, the Circle of Friends of the Medallion (active 1909 to 1915).

The circle faded from sight in 1915, but in 1928 Pratt founded the vastly more successful Society of Medalists, which issued 129 fine art medals at the rate of two each year until 1995. The Horticultural Society award blends Pratt’s love of nature with his devotion to the art of the medal.