Found In Rolls: Halves hard to find in Florida 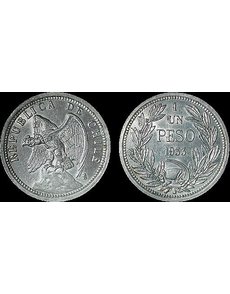 This unexpected fun find of a 1933 1-peso coin issued for the Republic of Chile was found in a roll of U.S. Kennedy half dollars from one of the author’s local banks. Half dollars have been difficult to find in Florida.

When I lived in Washington state and, prior to that, resided in Pennsylvania, I could obtain all the 50-cent pieces that I could handle.

As a roll searcher, I was spoiled rotten by the banks and credit unions I frequented, as their vaults were loaded with half dollars that they were always eager to get rid of.

They were more than thrilled to let me have any half dollars they had. Those banks that didn’t have half dollars in their vaults would actually order them for me by the box. I felt loved and needed!

Now that I live in Florida, the story is much different. I would definitely say that my access to rolls of half dollars has diminished greatly during the past six months or so.

Oh, I have found a few rolls and individual pieces here and there, but it has been difficult to obtain half dollars in bulk. That is not to say that I haven’t found any good coins here in the southeast, just that it seems to take longer.

I guess it’s true that all good things come to those who wait, as this month I was again fortunate enough to discover a nice pile of apparently unsearched half dollars that had recently been cashed in at one of my local banks.

The first unusual coin to show up was a 1933 peso of the Republic of Chile. The obverse design depicts what is known as a Defiant Condor on Rock, facing left with the text REPUBLICA DE CHILE encircling the upper portion of the coin.

The reverse features the denomination above the date, 1 UN PESO 1933, within a laurel wreath.

Struck in a copper-nickel alloy with a reeded edge, this coin weighs 10.07 grams and is 29 millimeters in diameter.

It is slightly smaller in diameter than a U.S. half dollar, which measures 30.6 millimeters, so it is somewhat understandable that this unexpected fun find could have been mixed in with the 50-cent pieces in the roll.

Since the coin shows some slight evidence of wear, I would grade the piece as About Uncirculated 58. A reported mintage of 29,976,000 pieces makes this an unusual roll find, although the coin is not considered scarce.

Finally, as I searched through several rolls of dimes, one particularly scratched and mutilated 1963 Roosevelt dime showed up.

The coin had been through the “wringer.” It still exhibited About Uncirculated luster, but the obverse was covered with deep gouges and scrapes. However, it is still silver!

I’ll share some other discoveries in my next column.