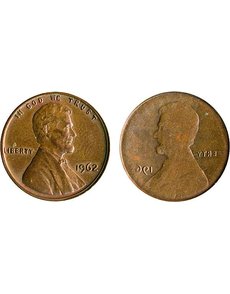 This 1962 Lincoln cent shows a mirror brockage of the obverse design on the reverse face. Both planchet and coin were struck fully within the collar. 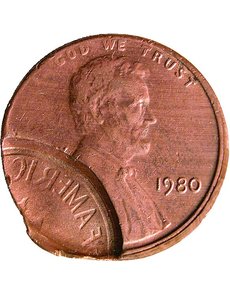 This 1980 Lincoln cent shows a partial mirror brockage of the reverse design on the obverse face. The planchet represented by this coin was fully confined by the collar. 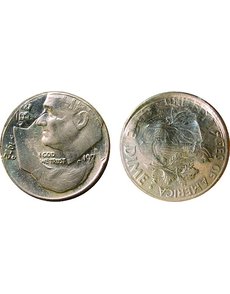 The second strike applied to this 1972-D Roosevelt dime was delivered about 40 percent off-center and with lower-than-normal striking pressure. A second dime lay beneath at the time and generated a mirror brockage of Roosevelt’s head on the reverse face of the second strike. Neither dime was centered within the striking chamber during the second strike.

A brockage is an incuse, mirror-image version of a coin’s design. It is generated when a coin is struck into a planchet or when two previously-struck coins overlap within the striking chamber.

The most desirable kind of brockage is a first impression (“first-strike brockage”) that is sharply defined and shows little or no expansion. Many first-strike brockages are expanded and distorted. The subset that exhibits minimal expansion emerges under special circumstances. These original-size, incuse impressions are often termed “mirror brockages.” Regrettably, the term “mirror brockage” has been indiscriminately applied to brockages that fall far short of the strict standards maintained here.

A bona fide mirror brockage can arise under several circumstances:

Confinement of both discs within the collar: If both discs are confined by the collar, lateral expansion is blocked, and the brockage that results will show no expansion. The illustrated 1962 Lincoln cent shows a mirror brockage of the obverse design on the reverse face. The planchet represented by this coin was fully confined by the collar. Since it was on top, it follows that the bottom coin (the “brockage-maker”) was confined as well.

This brockage is incomplete because the design of the bottom coin was incomplete. The bottom coin entered the striking chamber as a split planchet. This resulted in reduced effective striking pressure and the failure of some details to strike up.

Confinement of the bottom disc within the collar: When a coin is driven into a planchet, the two discs are temporarily locked together by frictional forces. Therefore, even if only the bottom disc is confined by the collar, this will still limit expansion of the top disc, although not always as effectively. Still, the result will often be a brockage with minimal expansion, as shown on the illustrated 1980 Lincoln cent. The planchet represented by this coin was fully confined by the collar, while the coin that generated the brockage was situated above the collar. Lateral expansion of the intrusive portion of the top coin was constrained by frictional forces.

The area of overlap was subjected to increased effective striking pressure owing to the double thickness. This caused some coin metal from the bottom coin to squeeze over the top of the collar in the form of “horizontal lipping.”

Weak (low-pressure) strike: When two discs overlap within the striking chamber, effective striking pressure is boosted well above normal “ram pressure” — at least under normal circumstances. “Ram pressure” is the tonnage applied to a planchet of normal thickness. Since two overlapping discs have an increased aggregate thickness, they are subjected to additional tons of pressure. This is why many first-strike brockages are grossly expanded and distorted when the two discs are struck out-of-collar.

At times, however, the presence of overlapping discs coincides with a press malfunction that either reduces ram pressure or increases the minimum die clearance. The latter is the gap that exists between the dies at their closest approach in the absence of a planchet.

The double-struck 1972-D Roosevelt dime shown here displays a mirror brockage of Roosevelt’s head on the reverse face of the second, off-center strike. Both the top coin and the bottom coin (the brockage-maker) were struck out-of-collar. Yet the brockage of Roosevelt’s head shows very little expansion. Striking pressure seems to have been great enough to generate a clear impression, but too weak to generate much expansion.

The Denver Mint produced many similar mirror brockages in the years 1968 to 1973, mainly among 5-cent coins, with some dimes, quarter dollars and half dollars thrown into the mix. Clearly, something odd was affecting the coinage presses at the Denver Mint during this six-year span. Oddly enough, I’ve never seen a Denver Mint cent from the same six-year period that shows this type of brockage.

Some mirror brockages owe their existence to a confluence of factors, the most common being a weak strike in combination with confinement of the bottom disc by the collar.

Additional factors come into play when you begin talking about mirror brockages from struck fragments, split-after-strike lamination flakes and other nonstandard brockage-makers. But space does not permit consideration of these exotica.