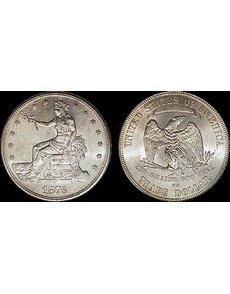 A reader’s silver Trade dollar appears to fall short of the accepted tolerance for weight. Shown is a genuine 1876-CC Trade dollar, which displays its weight in grains (420) and silver fineness (900) on its reverse.

Trade dollars were struck from 1873 to 1885, with the final seven years of the series consisting of Proof-only strikes.

Unlike other U.S. silver coins, the weight (in grains) and silver fineness is inscribed in a legend on the reverse of the Trade dollar — 420 GRAINS. 900 FINE. This testament was deemed necessary as the coin was struck to be used as a unit of trade in the Far East.

The Trade dollar’s specified total weight is 27.216 grams, but the coin can be over or under tolerance by as much as 0.097 gram and still remain of legal weight.

If his coin has been weighed accurately, Mr. Van Splinter’s 1876-CC Trade dollar, at 26.99 grams, appears to fall outside of the accepted 0.097-gram tolerance, weighing 0.226 gram less than the coin’s normal weight.

This raises the question: “Is this coin genuine?” Perhaps not. Unknown numbers of fake Trade dollars, among other classic U.S. coins, have been produced in China and spirited into the American market for more than a decade.

Another possibility is that Mr. Van Splinter’s coin is a genuine Trade dollar but was struck on an underweight planchet or has been altered in some fashion after the fact, such as having a small portion of its silver shaved from its edge. It’s also possible that the coin is so extremely worn that it has lost a significant amount of its original weight.

During its first few years of production, the U.S. Mint in Philadelphia struggled to make planchets that were of the proper specifications and of sufficient quality to coin.

For silver and gold, the planchet weights were often approximate and adjustments were made when necessary. To bring gold and silver planchets into acceptable tolerances, silver plugs were added for silver coins that were light; small amounts of metal were filed away on coins that were a little heavy, leaving file marks called adjustment marks.

Today, while the specifications for planchets for circulating coins are dictated by statutes, a small deviation is considered acceptable. Weights for bullion coins must meet more stringent standards, however.