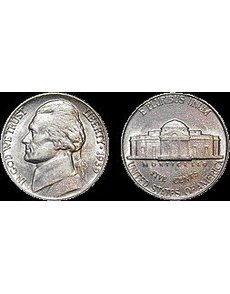 This month’s find of a 1939 Jefferson 5-cent coin in Mint State 60 condition is but one example of many coins in this series that a collector with enough patience can discover in remarkably nice condition.

Here’s a question for you. What series of United States coins offers us the ability to, with enough patience, actually complete a collection as we search through rolls?

I’ll give you a few clues:

(1) The design used on the obverse of the coin is a modification of a model created by sculptor, Felix Schlag.

(2) The model itself was chosen in an open competition from among other models submitted by many other artists.

(3) Schlag was awarded $1,000 as a prize for his winning submission

(4) The coin series in question was first issued in 1938 and it replaced the Indian Head 5-cent coin, which was previously minted from 1913 through 1938.

By now, you should be able to figure out the answer to my question, but if you are not still not certain, I am sure that the image included with this month’s column gives it away.

As a roll searcher, I feel that the series of Jefferson 5-cent coins is one of the most underrated collectibles in the history of U.S. numismatics. I suppose that is because with a few exceptions, most notably coins dated 1938-D, 1938-S, 1939-D, 1939-S and 1950-D, the series offers no real rarities to be found in rolls.

Indeed, even the dates mentioned are not considered rare and only barely rise to the level of being considered scarce. In fact, while looking through rolls of 5-cent coins over the years, I’ve found multiples of all the date and Mint mark combinations mentioned save the 1950-D, of which I have found only two examples during my 45 years of searching.

So, while underrated for the reason suggested earlier, the lack of rarities in the series gives us certain advantages as roll searchers.

Since most of the coins, regardless of their date and Mint mark, were issued in large numbers, it is not unusual as we search through rolls to find coins dated as early as their first year of issue, 1938.

Also, since not much attention seems to be paid to this series of coins by other roll searchers, 5-cent coins dated in the 1940s and 1950s are frequently encountered. And, depending upon where you are located in this great country, you can find many coins bearing Mint marks. For a roll searcher, that means that we can have a ton of fun filling a lot of openings in coin albums that are dedicated to preserving a collection of Jefferson 5-cent coins.

Finally, this month’s find of a 1939 Jefferson 5-cent coin in Mint State 60 condition is but one example of many coins in this series that with enough patience can be discovered in remarkably nice condition.

You may even find that tough 1950-D Jefferson 5-cent coin.