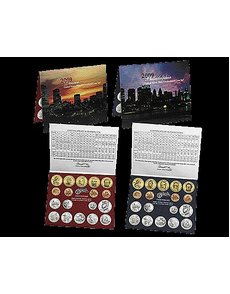 The 2009 Uncirculated Mint set contains 36 coins, the greatest number of coins ever included in one of the sets from the U.S. Mint.

In 2009, the Mint faced yet another challenge. They were adding eight more coins: new Lincoln cents that commemorated the bicentennial of the president’s birth. The cents included were a bronze alloy, rather than the copper-plated zinc composition used in circulation. The 36-coin set was the largest ever and the most expensive yet issued, at $27.95, a $5 increase from the prior year.

The set was released Oct. 1 and only 784,614 sets were sold, almost unchanged from 2008. The set’s higher price put it beyond the level of a casual gift or giveaway.

And there was a new problem. The cents included were special bronze issues. The 2009 Mint set failed to be a source of all current circulating coins by including noncirculating, legal tender versions in their place.

Something had to be done.

In 2010, the Mint made two announcements. First, the Mint announced that their core annual sets would be available in January 2011, giving collectors a longer window to purchase sets during the current year. Second, it announced the discontinuance of the Satin Finish. In a press release, it again focused on the appearance of the coins: “The satin finish ... highlights surface marks that inherently result from the coin-handling systems.”

The 2012 set currently has the highest secondary market value of any recently issued Mint set, and likely all these recent sets will remain keys for the near future.

Although the Mint has made real attempts to reinvigorate Mint set sales, a fundamental problem remains. Foremost, the set is no longer a convenient way to get circulating coins. From 2005 to 2010, the sets contained coins with a special finish and even special composition coins. Now, they contain 10 different dollar coins. These issues seldom circulate in the United States. Until a dollar coin is widely used in commerce, a Mint set comprising largely dollar coins won’t capture the enthusiasm of collectors.

When it does, these back issues may find new life.