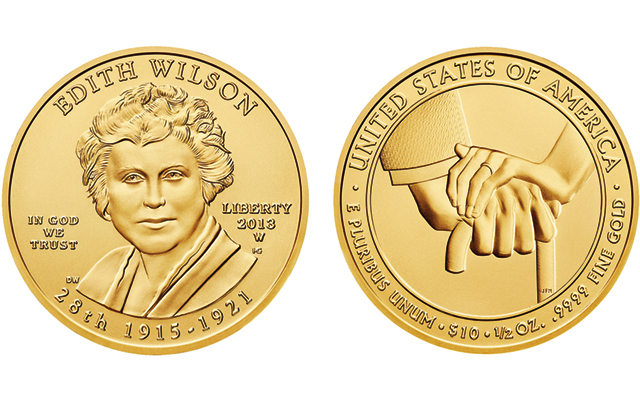 The lowest mintage figure, so far, for the First Spouse gold $10 coins is the 1,428 sold through May 25 for the Uncirculated 2013-W Edith Wilson half-ounce coin.

The Uncirculated version of one of the First Spouse gold $10 coins issued in conjunction with the Presidential dollar honoring Woodrow Wilson will likely record the lowest mintage for the series, but for which “First” Spouse?

Sales of only one of the 2013-W First Spouse gold coins have surpassed the 2,500-coin mark.

The U.S. Mint is likely to continue selling the 2013-W coins even after release of the 2014-W coins, for which release dates have not yet been announced.

Collector interest in the First Spouse gold coin series has dropped off sharply since the program was inaugurated in 2007.

Maximum mintages have been reduced almost every year since.

Over the same period, the spot price of gold has more than doubled, leading to similar price increases by the Mint for the coins.

When the First Spouse gold coin program was initiated with sales of the Martha Washington and Abigail Adams coins on June 19, 2007, maximum mintages were 40,000 combined for each First Spouse coin in Proof and Uncirculated.

The number of each version to be struck was to correspond with the orders placed and the total combined number of coins for those orders reached 40,000.

After both 2007 coins quickly sold out, U.S. Mint officials restricted the maximum mintage to 20,000 for each Proof and Uncirculated issue.

The Presidential $1 Coin Act of 2005 contains a provision to provide continuity of the First Spouse Gold Coin Program to represent the times when a president served without a spouse during his time in office. This provision applied first to Thomas Jefferson, whose wife, Martha, died in 1782.

For Jefferson’s presidency, the image selected was the Liberty figure that appeared on the Draped Bust half cent from 1800 to 1808, and was originally executed by United States Mint Chief Engraver Robert Scot.

The Dolley Madison First Spouse gold coins rounded out the series in 2007.

Just how many of the 2007 First Spouse coins remain from the reported mintages is unknown. Thousands of the Washington and Adams coins are known to have been melted early in 2008 when the price of gold began to escalate significantly, even though certified examples were still selling at premiums in the secondary market above melt value.

Some random, uncertified examples of previously released Proof and Uncirculated issues are currently being offered by secondary-market dealers for less than $50 an ounce over spot, simply in plastic capsules.

Updated sales and additional information can be found on the U.S. Mint’s website.