Uncirculated 2011 gold half eagle sales lowest in a 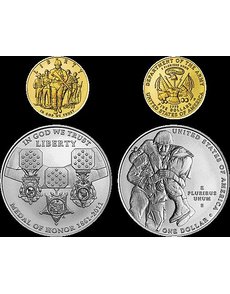 The Uncirculated 2011-W U.S. Army gold $5 half eagle, top, has a tentative final mintage of just over 8,000 coins. The Uncirculated 2011-S Medal of Honor silver dollar, bottom, recorded sales of nearly 45,000 coins through the program’s end Dec. 16, with final figures still to be reconciled.

The U.S. Mint closed out sales of its two 2011 commemorative coin programs at 5 p.m. Eastern Time Dec. 16, with preliminary totals representing just fractions of the authorized mintages, and sales of the Uncirculated gold half eagles at their lowest levels in a decade.

The three-coin United States Army coin program offered Proof and Uncirculated versions of up to 100,000 gold $5 half eagles, 500,000 silver dollars and 750,000 copper-nickel clad half dollars.

The Medal of Honor coin program offered Proof and Uncirculated versions of up to 100,000 half eagles and 500,000 silver dollars.

Sales for both programs are preliminary, with final tallies still to be reconciled.

For the Medal of Honor program, sales contained on the U.S. Mint’s Dec. 19 sales report show:

The selling price for each of the gold $5 half eagles for both programs incorporated a $35 surcharge and a $10 surcharge for each silver dollar. The half dollars for the U.S. Army program each carried a $5 surcharge in the purchase prices.

Surcharges collected from the U.S. Army coin program, after the Mint recoups all production costs, are to be paid to the Army Historical Foundation to help finance the National Museum of the United States Army at Fort Belvoir, Va.

The surcharges for the Medal of Honor program, after the Mint recoups all production costs, are to be paid to the Congressional Medal of Honor Foundation to help finance the educational, scholarship and outreach programs of the Foundation. ¦

Several minor errors in this article were corrected on Dec. 29.