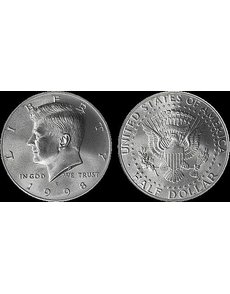 This 1998-S Kennedy silver half dollar paired in a two-coin set with a Robert F. Kennedy silver dollar has the same Matte Finish as 1994-P and 1997-P Jefferson 5-cent coins included in separate, limited-edition commemorative coin sets in 1994 and 1997.

Hoping to boost sales of the forthcoming 1998 Robert F. Kennedy silver dollar, the Mint again employed a similar tactic. It offered a two-coin set that included the silver dollar and a silver Kennedy half dollar. To match the appearance of the commemorative coin, the half dollar was struck from sandblasted dies that imparted a Matte Finish.

The Mint was unable to predict what demand for the half dollar might be. Rather than set a fixed mintage figure, it decided to produce as many of the sets as it could sell during a six-week period. The two-coin “Kennedy Collector’s Set” went on sale Jan. 1, 1998. All orders had to be received by Feb. 13, 1998. The set was priced at $59.95.

During that same time window, the Uncirculated Robert F. Kennedy silver dollar was available individually at a pre-issue price of $30, putting the net price of the half dollar in the set at $29.95.

Working in the coin’s favor was the Matte Finish 1997-P Jefferson 5-cent coin. By the start of 1998, it was trading for as much as $300. That coin had a very limited mintage of just 25,000, but numerous comparisons were made between the two coins.

Final sales of the set, and therefore the mintage figure of the half dollar, are variously reported between 62,000 and 63,500. Despite its high initial offering price, such low production indeed made the coin a winner.

The coins are very well made and usually beautiful. Irregular, sometimes dark spotting and high-point luster grazes are the most common grade-limiting factors that hold back a coin from grading Specimen 70.