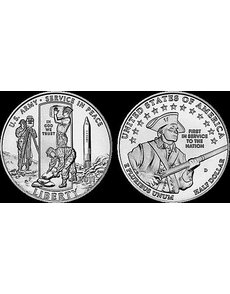 The Uncirculated 2011-D United States Army half dollar has a low mintage, fewer than 40,000 coins. The limited supply helps make it one of the few recent U.S. commemorative coins to enjoy a robust aftermarket.

It is often hard to predict which modern issues will become tomorrow’s key coins.

Some commemorative programs are obvious successes from the start, such as the 2009 Abraham Lincoln commemorative silver dollar program, which focuses on a beloved historic figure with a rich numismatic history.

One would have thought that the 2011 coins honoring the U.S. Army would have also fallen into the success category as the United States Army is the largest branch of the armed forces.

During 2010, more than a million people were in active service in the Army, Army National Guard and U.S. Army Reserve. Further, millions more are Army veterans, creating a huge potential purchasing base.

Yet those factors were not enough to lift the mintage of the Uncirculated 2011-D U.S. Army commemorative half dollar.

The paltry mintage of 39,461 coins makes it the lowest mintage commemorative half dollar of the modern era, and combined with the 68,349 Proof examples, just over 14 percent of the authorized mintage of 750,000 coins sold.

For comparison, the most common commemorative half dollar of the modern era is the 1986 Statue of Liberty coin with a combined Proof and Uncirculated mintage of nearly 8 million.

Collectors who purchased the Uncirculated 2011-D U.S. Army half dollar at its introductory price of $15.95 or its regular issue price of $19.95 received a relative windfall, as recent online transactions have shown the Uncirculated piece trading at the $75 level while Proof examples have been selling for as much as $50.

Why the modern commemorative half dollars have not gained more popularity in recent years is a mystery. It is a relatively accessible set in that it has fewer than 20 coins, and but for the two 1996 Olympics issues depicting swimming and soccer and the 2011 U.S. Army coins, all of the half dollar types can be easily found for less than $25 each. Further, they continue the rich tradition of U.S. commemorative half dollars that began in 1892 with the World’s Columbian Exposition issues.