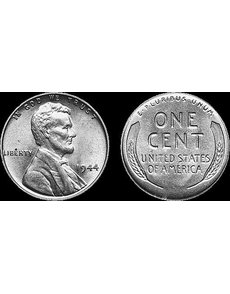 Perhaps even more attractive than a similarly graded 1944 Lincoln cent struck on a zinc-coated steel cent planchet, this Mint State 62 1944 cent struck on a Philippines 5 centavo planchet brought $6,462.50 on Nov. 2.

Collectors are often advised to specialize when picking a collecting topic, with the understanding that a narrow focus will allow a collector to more fully educate himself or herself.

Heritage Auctions’ recent Nov. 2 auction of the Geyer Family Collection showed the benefits — and a few of the limitations — of having a very narrow focus. A large part of the collection consisted of off-metal U.S. error coins produced during World War II, and some wondered if the market could absorb this many examples of a coveted but specialized error category.

The most famous of these pieces are off-metal 1943 and 1944 Lincoln cents. A 1943-S Lincoln cent struck on a bronze planchet rather than the zinc-coated steel planchet typical for 1943 cents, graded Very Fine 35, brought $141,000. Considering that it last sold at auction in 2010 for $207,000, the price was somewhat disappointing. A 1943 Lincoln cent, also struck on a copper planchet with similar details but several substantial obverse scratches brought $88,125.

1944 Lincoln cents struck on zinc-coated steel planchets are a bit more common than their 1943 off-metal counterparts. A 1944 example graded About Uncirculated 58 and a 1944-D cent graded AU-53 both sold for $30,550. That both had appeared in previous auctions in recent years where they sold for more highlights a risk of bringing coins to market without a substantial holding period.

Those looking for a more accessible alternative to the rare 1943 and 1944 off-metal cent strikes could select from several cents of those years struck on planchets intended for coins of other nations produced at the U.S. Mint during the period.

One such example, a 1944 Lincoln cent struck on a copper-zinc-nickel planchet intended for a Philippines 5-centavo coin, graded Mint State 62, was better looking than a typical off-metal 1944 Lincoln cent on a zinc-coated steel planchet, and substantially less expensive. It sold for $6,462.50, a fraction of what a 1944 steel cent would bring. For the same amount, a collector could get a 1943-S Lincoln cent struck on a copper-colored Peru 5-centavo planchet. However, the Peru planchet is slightly smaller than the typical cent planchet and it was damaged.