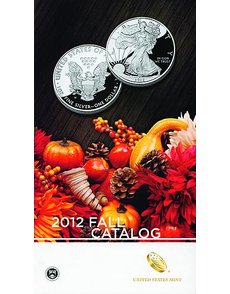 Let’s say you own a business that sells many products to a group of loyal buyers, yet you are always striving to get those existing buyers to branch out to new things.

Each product you sell is a luxury, something nobody really needs.

Would you choose to put a sold-out product on your cover?

The U.S. Mint did just that when it placed its Proof 2012-W American Eagle silver dollar on the cover of its holiday sales catalog. Nov. 13, by the time the marketing piece arrived in many of the Mint’s customers’ mailboxes, the Mint reported that its inventory of individually packaged coins was sold out and that no more would be produced.

It remains available for ordering as part of the Making American History Coin and Currency set and as part of a new limited-edition Silver Proof set that is scheduled to be made available Nov. 27.

Isn’t the function of a holiday catalog to sell items that are available for sale?

Why would the United States Mint select a coin for its cover that did not have guaranteed ordering availability during the holiday season? With the many other products produced this year, it’s not like the Mint was faced with a dearth of items to choose from.

In the catalog the coin is at the $54.95 price although it’s noted directly below the image, “Due to the volatility of the precious metal markets, prices for products containing silver are subject to change.”

A potential collector who received this catalog would likely have no indication that the coin itself was subject to limited availability.

If the Mint is hoping to entice new people to buy coins with its catalog, spotlighting a sold-out coin on the cover while not clearly alerting people to the possibility of a sellout is certainly not the way to do it. ¦