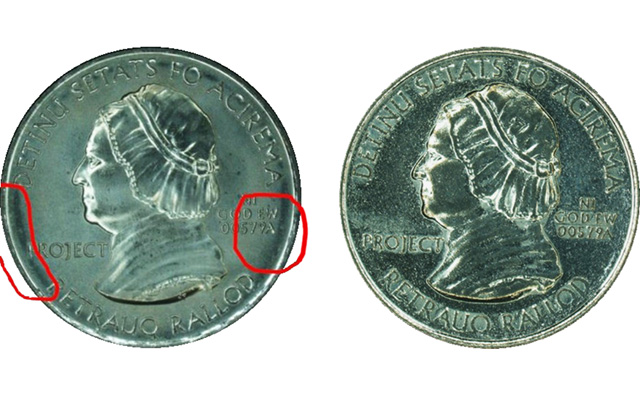 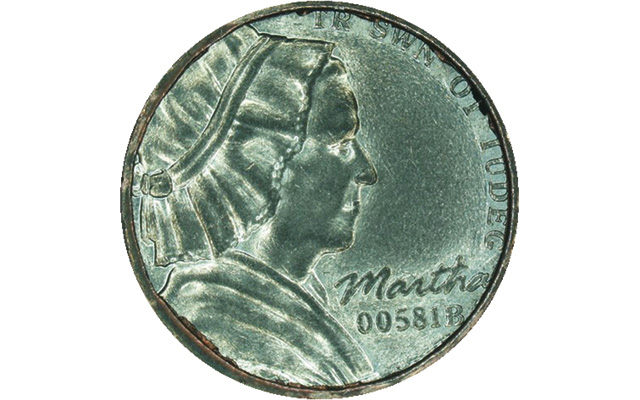 Notice the fragments of plating remaining around the edge of this tin-plated copper-plated zinc 5-cent test piece after being subjected to a wear test.

According to the U.S. Mint's 2014 Biennial Report to Congress, the Mint has been testing blanks containing 80 percent copper and 20 percent nickel for circulating coins, with different levels of manganese substituted for some of the nickel in related test compositions.

The various alternatives were tested for coinability, wear, hardness, coin sorting and electrical conductivity, and die life, among other variables.

The 80/20 alternatives would not require changes to coin acceptors, according to the U.S. Mint’s findings, and would offer small savings over other possibilities. However, the other alternatives tested would require coin vending and sorting equipment retrofitting, since the weight and electromagnetic signature of each option would differ from the existing parameters.

The U.S. Mint suggests that an 80/20 alternative offers annual savings to the bureau of $5.25 million on the 5-cent, dime and quarter dollar.

Regarding the other alternatives, vending and coin-handling representatives estimate the equipment retrofitting and/or replacements costs would be in the billions of dollars.

Plated steel alternatives would offer the Mint substantial savings, but along with presenting expenses to coin handling machine operators, would also present increased risks of fraud and confusion with low-denomination foreign coins.

Stainless steel resists corrosion, but its hardness negatively impacts coinability, according to the U.S. Mint’s findings.

The U.S. Mint’s research also included adjusting the height of relief and crown on the coin designs to address unacceptable metal fill on some materials. The adjustments presented other challenges, including border elements filling before inner details, or the flow of the material changing.