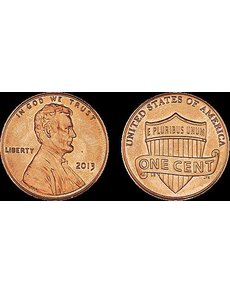 The cost to produce and distribute copper-plated zinc Lincoln cents for circulation during Fiscal Year 2013 was 1.83 cents per coin, the eighth consecutive fiscal year the costs exceeded the face value.

For the eighth consecutive fiscal year, the costs for the United States Mint to produce and distribute Lincoln cents and Jefferson 5-cent coins for circulation have exceeded their face value.

The U.S. Mint is in its fourth year of research, prompted by a 2010 congressional mandate to research alternative compositions for the two denominations with a goal of reining in production and distribution costs. Most of the coins’ costs are attributed to the cost of the base metals each coin contains.

The 5-cent piece has the composition introduced for it in 1866: a homogenous alloy of 75 percent copper and 25 percent nickel. This has been its composition except for the World War II period of 1942 through 1945, when the 5-cent coin alloy was 56 percent copper, 35 percent silver and 9 percent manganese.

While the number of units of numismatic products sold during fiscal 2013 dropped less than 1 percent, to 5.5 million units, total revenue generated increased 6.5 percent, to $512.4 million.

Among the new technology implemented during fiscal 2013 is the Press Die Vision System, or PDVS. The PDVS is designed to prevent the presses from operating until the system approves the dies installed. The system employs computer-controlled servo motors, infrared lights, special mirrors and a camera to inspect the installed dies.

If the dies are not the appropriate matched pair, the striking mechanism will lock and not be released until the proper die combination is installed on the coinage press.

The PDVS is designed to prevent production of mule error coins — coins struck with a set of dies not intended to be matched together — for all denominations.

In another technological achievement described in the annual report, the U.S. Mint’s Research and Development Team has pioneered unique Proof polishing and laser frosting techniques.

“The process begins with selective horsehair and Proof polishing to achieve varying degrees of reflectivity and brightness,” according to the 2013 Annual Report. “Aspects of the artwork and field are selectively masked or left exposed to control levels of polish.

“Degrees of laser intensity are applied to accentuate specific parts of the design and then laser-generated textures are strategically applied for the final artistic touch.”

In July 2013, the U.S. Mint established the Office of Coin Studies primarily to investigate what other countries are doing with coins and the emerging trends in payment systems.

The Office of Coin Studies is being directed by Jon Cameron, a former executive with the Federal Reserve and the Bureau of Engraving and Printing.

Cameron joined the Mint’s Office of Coin Studies as its director after seven years as the associate director of the BEP’s Eastern Currency Facility in Washington, D.C.

Cameron’s expertise is in payment systems including cash, credit cards, checks and electronic transactions, according to the Mint.

The Treasury Department established goals for the U.S. Mint to reduce its direct greenhouse gas emissions by 33 percent and indirect gas emission by 11 percent between 2008 and 2020. The U.S. Mint has already eclipsed those goals, with 47 percent and 32 percent reductions, respectively.

As part of meeting the Treasury goals, the Philadelphia and Denver Mints have been undergoing continual retro-commissioning to improve energy costs.

The Denver Mint “purchases all electricity from renewable sources,” according to the Mint. “Wind turbines supply 100 percent of the energy needs of the Mint at Denver.”

The San Francisco Mint now recycles all of its trash, measured at 133,251 pounds, rather than sending it to a landfill.

According to the report, during 2013, the Mint eliminated the use of hexavalent chrome, a known carcinogen, and lead, a toxic waste by-product, by switching to physical vapor deposition for the steel dies used to strike Proof coins.