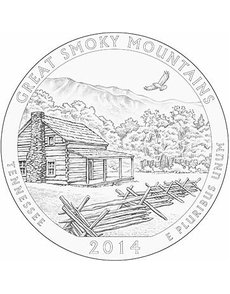 The approved design for the 2014 Great Smoky Mountains National Park quarter dollar was recommended by the Commission of Fine Arts in November 2012.All images courtesy of United States Mint. 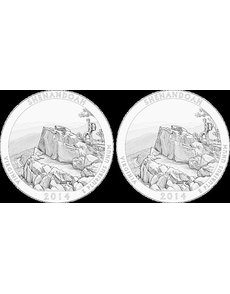 The design at left approved for the Shenandoah National Park quarter dollar was modified from the proposed design, right. A tree branch was removed from behind the day hiker. 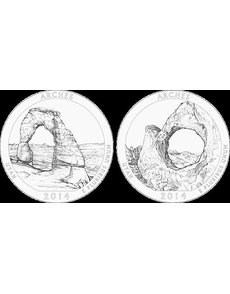 The Treasury Department followed the recommendation of the CCAC in approving the design, left, for the Arches National Park quarter dollar. The CFA recommended a different rendition, below. 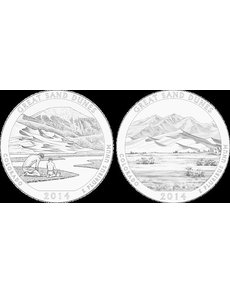 Above left is the Treasury-approved design for the Great Sand Dunes National Park quarter dollar. At right is the CFA-recommended design. The CCAC made no design recommendation for this coin. 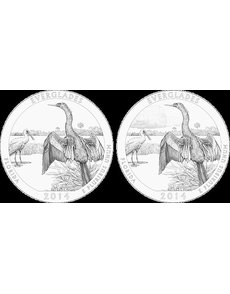 The designs approved for three of the five 2014 America the Beautiful quarter dollars are modified from the renditions reviewed by two federal advisory panels in November 2012.

On Nov. 12, the U.S. Mint released the five designs approved by Deputy Treasury Secretary Neal S. Wolin for the 2014 quarter dollars. Wolin left the Treasury post at the end of August.

Three of the five Treasury-approved designs — for Great Smoky Mountains, Shenandoah and Everglades national parks — were recommended by the Commission of Fine Arts in 2012.

Of the three CFA-recommended designs that the Treasury Department approved, two — for Shenandoah and Everglades — were modified from the original renditions that were reviewed Nov. 15, 2012, by the CFA and Nov. 27, 2012, by Citizens Coinage Advisory Committee members.

The CCAC recommended designs for the Shenandoah, Arches and Everglades coins, but not for the Great Smoky Mountains or Great Sand Dunes coins.

The CCAC had panned some of the proposed artwork at its Nov. 27, 2012, session as “post card” designs.

In a Nov. 12, 2013, email, CCAC member Michael Bugeja said he and other numismatists have encouraged designers to take into account the 24.3-millimeter diameter of the quarter dollar when executing their designs. He said not all of the proposed 2014 quarter dollar designs took the diameter into consideration.

“I write about technology’s impact on the senses,” said Bugeja, a professor in the Greenlee School of Journalism and Communication at Iowa State University.

“Because of widespread use of computers, which also happens in coin design, we tend to see things from the frame of a screen or monitor. We’re able to expand, reduce and manipulate digital artwork. As any sculptor will tell you, the feel of clay is a lot different than the touch of a keyboard using a 3-D application.

“We need more of a feel for numismatic design, in the traditional artistic sense,” Bugeja said in the email message.

The Treasury-adopted design for the Great Smoky Mountains National Park quarter dollar depicts a historic log cabin found within the park, with a hawk circling above. The adopted design is as it was originally proposed. The CFA recommended the design.

The CCAC made no recommendation for that quarter dollar, since none of the four proposed designs garnered enough votes. Each member is allowed to give a design up to three points. To win CCAC recommendation, a design must get more than half of the possible 30 points.

The design approved for the Shenandoah National Park quarter dollar depicts a day hiker taking in the view from Little Stony Man summit. The design was recommended by both the CFA and CCAC. The Treasury-approved design was modified from the original version reviewed by the two advisory panels. A tree branch behind the hiker on the original design was removed.

The seven designs submitted for the Arches National Park quarter dollar all depicted different renditions of Delicate Arch, a 65-foot, freestanding, natural arch. It is a widely recognizable landmark in Utah and the most famous arch found in the park. It has been depicted on postage stamps and license plates. The La Sal Mountains are visible in the background. The approved design was the one recommended by the CCAC. The CFA recommended a different rendition of Delicate Arch.

For the Great Sand Dunes National Park quarter dollar, the approved design features a father and son playing in the sand next to the creek bed. The distinctive mountains and sand dunes are featured in the background.

The CCAC recommended none of the seven proposed designs. The CFA had recommended a design depicting the various geographic zones — grasslands, sand dunes and mountains.

Members of the CFA and CCAC both recommended the same proposed design for the Everglades National Park quarter dollar. It depicts an anhinga with outstretched wings on a willow tree, with a roseate spoonbill visible in the mid-ground. Both birds are found throughout the Everglades National Park. The approved design was modified from the proposed design through the removal of clouds from the upper left field.

For details about the release of the five 2014 coins, see the article in the Nov. 25 issue of Coin World. ¦