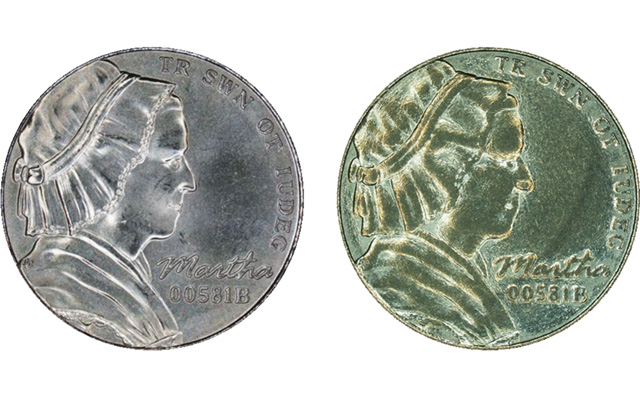 An 80/20B test piece, above left, is shown as it appears after being struck at 54 metric tons on a coinage press. The image above right shows the composition after being subjected to wear testing.

The United States Mint recommends in its 2014 Biennial Report to Congress filed Dec. 12 to pursue additional testing of a promising alloy of 80 percent copper, 20 percent nickel for circulating U.S. coins.

It is the second such report submitted to Congress under provisions of the Coin Modernization, Oversight and Continuity Act of 2010, Public Law 111-302. The first report was submitted in December 2012.

The U.S. Mint is researching alternatives for a “seamless” circulation introduction since any selected alternative would co-circulate with existing coinage.

Continued examination of stainless steel options, which currently points to a thinner copper core for the clad pieces, resulting in a lighter final product, is also recommended.

All of the experimental pieces struck during the testing were produced with “nonsense dies” bearing designs to simulate production images. The obverse designs bear renditions of First Lady Martha Washington. The 5-cent nonsense reverse depicts Monticello.

Over the past four years, the U.S. Mint has been exploring composition alternatives, since the cost of metals for the existing compositions has pushed the production costs for the cent and 5-cent coins above their face value.

The cost to produce and distribute the Lincoln cent was 1.7 cents during Fiscal Year 2014, down from 2.41 cents three years earlier. The latest cost for the 5-cent coin is 8.1 cents, while the dime clocks in at 3.9 cents and the quarter dollar at 9 cents per coin.

U.S. Mint officials have not found an alternative composition for the copper-plated zinc cent that would bring costs below face value.

The conclusions reached in the 2014 report center on research into possible alternatives for the 5-cent coin, dime, and quarter dollar.

Those in the vending machine and coin-handling industries stress that any composition alternative should maintain the weight and electromagnetic signature of the current denominations to eliminate the need to retrofit equipment.

The 2014 biennial report also examines the study of ringed-bimetallic coinage, an alternative that according to U.S. Mint consultation with Royal Mint and Royal Canadian Mint representatives, should be reserved for denominations of $1 and higher. The report suggested considering use of a clad core for any such bimetallic pieces.

While the U.S. Mint currently strikes manganese-brass clad Presidential and Native American dollars in circulation quality, all such coins are produced for inclusion in numismatic products and as such are sold at prices above their face value, with none placed into general circulation by the Mint.

The 2014 Biennial Report also examines the results of a study conducted by Fraunhofer USA into laser blanking.