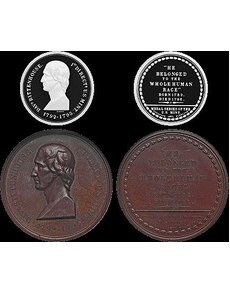 To reward excellence within the ranks of the United States Mint, the nation’s coin producer recognizes achievements with the presentation of the Rittenhouse Medal of Excellence.

The medal replicates the designs that first appeared on Chief Engraver William Barber’s 1871 medal depicting David Rittenhouse, who served from 1792 to 1795 as the first director of the Mint.

For 2013, the U.S. Mint recognized 33 Mint employees June 12 with what is now the bureau’s highest honor, for sustaining “a superior record of performance that significantly furthered and ultimately improved the bureau’s programs, operations and services.”

Participating in the awards presentation at Mint headquarters in Washington, D.C., were Acting U.S. Mint Director Dick Peterson and U.S. Treasurer Rosa “Rosie” Gumataotao Rios. They were joined by Chas Rittenhouse, a descendant of the first Mint director.

Since the 2008 inception of the silver Rittenhouse Medal of Excellence, 156 such medals have been awarded.

The Rittenhouse silver award medals are struck at the Philadelphia Mint three times on a Gräbener GMP 360 press with dies oriented to strike with vertical motion.

The striking pressure for each of the three strikes is 202 metric tons.

The presses used at Philadelphia are the same ones that strike commemorative silver dollars, according to U.S. Mint spokesman Michael White.

The award medal is struck as a Cameo Proof, from dies bearing sandblasted devices and inscriptions against polished mirrored fields. The die faces also receive a thin chrome plating.

Barber’s original Rittenhouse medals were produced at the Philadelphia Mint in 45-millimeter “bronze” and silver versions, and dated 1871. The new award medals are also dated 1871. It is unclear today why the original medals were made, though it is likely they were produced for sales to collectors, like many other Mint products of the late 19th century.

According to R.W. Julian in Medals of the United States Mint: The First Century 1792-1892, the use of the term “bronze” for the composition of the Mint’s medals prior to 1901 is a misnomer. Julian explains that the “bronze” medals the U.S. Mint made from 1825 to about 1891 (of many types and designs, and produced for many purposes) were composed of pure copper. Each medal was chemically treated after striking to achieve distinctive coloration. The composition should be correctly referred to as copper-bronzed, according to Julian.

Although Rittenhouse medals were probably first struck in 1871, according to Julian, the first officially recorded sale of a Rittenhouse medal by the Mint did not come until early in 1874. ¦