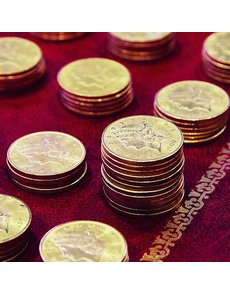 A close-up image shows the obverse of a 1900 Coronet $20 double eagle gold coin found hidden in the attic of a building owned by a French winery. 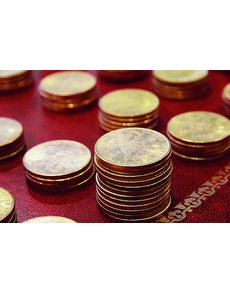 This close-up image shows the reverse of a 1900 Coronet $20 double eagle gold coin found hidden in the attic of a building owned by a French winery. 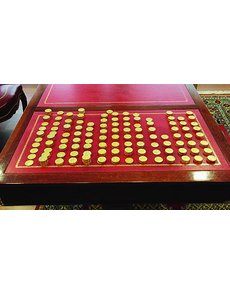 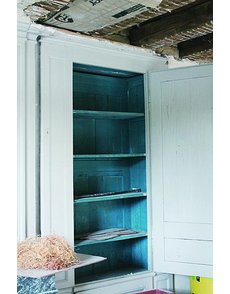 Nearly 500 U.S. gold coins were discovered in the exposed attic rafters, at top, of a building undergoing renovation. The discovery was made in February 2012 when some of the coins rained down from the ceiling onto a worker’s hard hat.

A workman at a French winery was stunned when he discovered nearly 500 U.S. gold coins while working on a renovation project at the winery.

Bonhams will offer at auction June 3 in Los Angeles the Champagne Lanson Bonnet Vineyard Collection of 497 Coronet and Saint-Gaudens gold $20 double eagles, bearing dates between 1851 and 1928.

The discovery was made in February 2012 when some of the coins rained down from the ceiling onto the worker’s hard hat, according to Bonhams. The coins spent more than 80 years hidden in the attic of the building.

The anonymous employee was working on a former grape-drying facility belonging to the Alexandre Bonnet Champagne company and located in the village of Les Riceys, France, east-southeast of Paris.

The coins range in condition from Very Fine to choice Mint State and have an approximate value of $1 million, according to the firm.

The coins, in bags of 50 each, were found tucked between the ceiling joists of the attic of a building undergoing renovation to provide accommodations for grape pickers.

“Bonhams is extremely pleased to be working with The Lanson-BCC Group on this auction. With many coin collections typically found in bank vaults, we are excited to bring this new, uniquely discovered treasure to auction,” Paul Song, director of the Rare Coins and Banknotes Department at Bonhams.

Song said the Bonhams office in Paris “was instrumental in working closely with the consignor, Lanson-BCC Group.”

Song said no one knows how the coins came to be in the attic of the building, “but the building was owned by a wine producer who traded with the United States and England in the 1930s.”

The Lanson employee who told company officials about the coins did not know that he would be entitled to half of the proceeds under French law, according to Song.

Vineyard officials, who describe the man as modest, say he will now be able to buy or build a house for his family with his half of the auction proceeds. Vineyard owner Francois Lange will get the other half.

Previews of The Champagne Lanson Bonnet Vineyard Collection will be on Bonhams’ spring highlight tour with stops in Bonhams’ offices in New York, San Francisco and Los Angeles.

A catalog will be available in the weeks preceding the sale at www.bonhams.com/us.