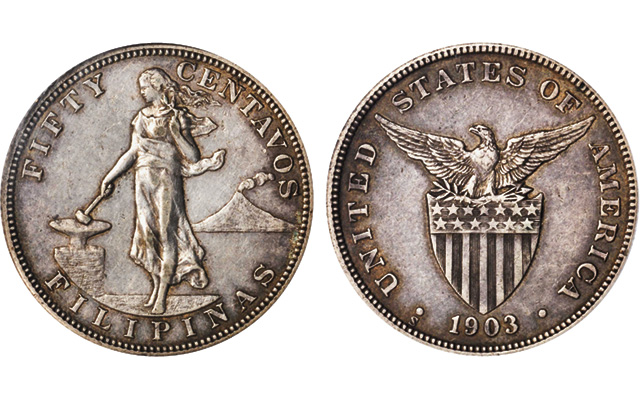 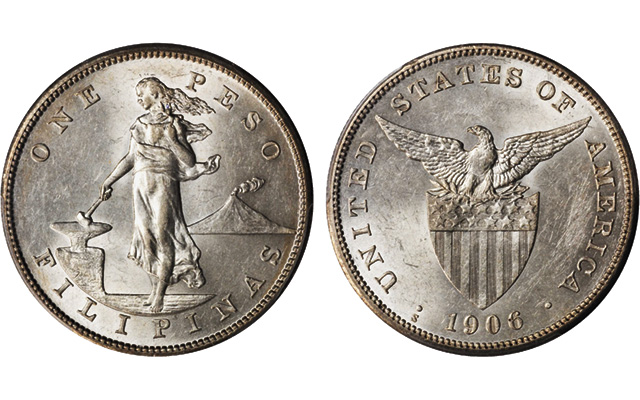 The “key” coin for collectors of American-Philippine coinage is the 1906-S silver peso which is rare despite a reportedly high mintage.

After the Spanish-American War, the United States controlled the Philippines and issued coinage for the islands, (eventually even opening a U.S. Mint facility, the Manila Mint, in 1920).

The coin is the finer of two known examples to bear the S Mint mark from the San Francisco Mint. The Mint mark appears on the reverse to the left of the shield.

An unknown, but extremely small number (ventured by researcher Lyman Allen to be fewer than 10 pieces) were struck as assay or die trial pieces and were to have been destroyed. Apparently not all were.

In the early 1980s, the example in the 2015 auction was discovered in a dealer junk box in Manila and was quickly sold to another dealer.

The American Numismatic Association Authentication Bureau authenticated the coin, and the coin almost entered the collection of Amon Carter, Jr., according to Stack’s Bowers & Ponterio, but he died before the sale could be made.

Instead, the discovery coin traded privately over the nearly three decades that followed, before being certified by Professional Coin Grading Service (as About Uncirculated-50) and being sold to the current owner.

The only other example, which is graded Extremely Fine-45 by ANACS, realized $22,000 when sold in August 2001, according to Stack’s Bowers & Ponterio.

Another highlight of American-made silver coins for the Philippines is the 1906-S peso, which is graded Mint State 61 by PCGS.

The coin is the key date in the early U.S. Philippines series, and “very rare” in Mint State, according to the auction house.

Although research lists a mintage of 201,000 Pesos struck, most of these were never released then melted and recoined into the smaller size Peso struck in 1907. There are believed to only be a few hundred examples known, many of which are heavily circulated to the point of being in the Fine to Very Fine range.

Others that were saved were perhaps not cared for properly over the years, and have seen varying degrees of cleaning and/or polishing.

The auction house points to grading service census records for further evidence of the true scarcity of the date.

“PCGS has only assigned numerical grades to this date 36 times. Only a very small handful of examples are known in Mint State, and these create quite the stir when available to the collector public.”