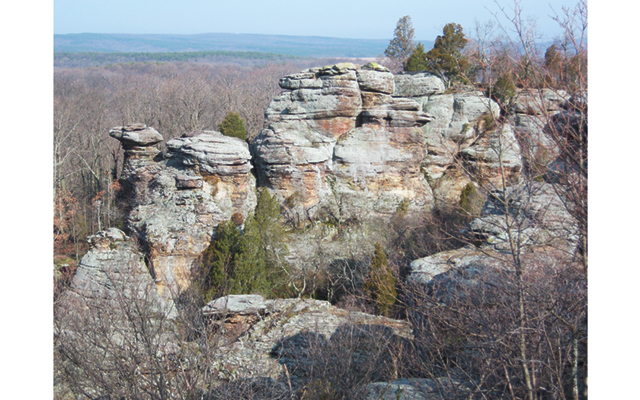 The Camel Rock formation in the Garden of the Gods region of Shawnee National Forest in Illinois is being suggested as a design theme for the reverse of a 2016 America the Beautiful quarter dollar.

Suggested themes for the U.S. Mint’s engraving staff and Artistic Infusion Program artists to consider for the 2016 America the Beautiful quarter dollars have been announced.

The themes were presented May 19 during the Citizens Coinage Advisory Committee meeting in Philadelphia.

According to April Stafford, director of the U.S. Mint’s Office of Design Management, the themes were developed after consultation with representatives from the respective national park or historic area being commemorated.

The national parks and historic sites to be recognized with 2016 quarter dollars for circulation, collector sets, and 5-ounce silver bullion and numismatic version follow, along with suggested themes:

??Shawnee National Forest, Illinois — Under the jurisdiction of the U.S. Forest Service, the Shawnee National Forest was congressionally recognized Sept. 6, 1939. Garden of the Gods Wilderness has been designated an appropriate theme. Suggested rock formations from which to draw inspiration are the iconic Camel Rock, as well as Table Rock and Devil’s Smokestack.

??Cumberland Gap National Historical Park, Kentucky ?— Recognized by statute June 11, 1940. Located at the border where Kentucky, Tennessee, and Virginia meet. Appropriate devices identified are Cumberland Gap, the natural notch in the mountains; and woodland bison and elk, which used the gap.

??Theodore Roosevelt National Park, North Dakota —?established in 1946 as a national wildlife refuge. Located in the Badlands of North Dakota. The park was established to memorialize the area’s importance in Roosevelt’s life and the key role it played in fostering his conservation ethics. Suggested design themes comprise a young Theodore Roosevelt on horseback, Roosevelt’s Maltese Cross cabin, and Riverbend Overlook.

??Fort Moultrie (Fort Sumter National Monument), South Carolina ?— Fort Moultrie is managed as part of Fort Sumter National Monument, which was established in 1948. Fort Moultrie protected the city of Charleston and its strategically important harbor for 171 years, from the American Revolution through World War II. Suggested design themes include Sgt. William Jasper’s returning the regimental flag of the 2nd South Carolina Regiment to the fort’s ramparts after a British cannonball severed the flagpole during the Revolution; an image of the fort; and images of the original cannons inside the fort.

Any proposed designs submitted through the Mint are mandated to be reviewed by the Commission of Fine Arts and Citizens Coinage Advisory Committee for recommendation to the Treasury secretary for final approval.