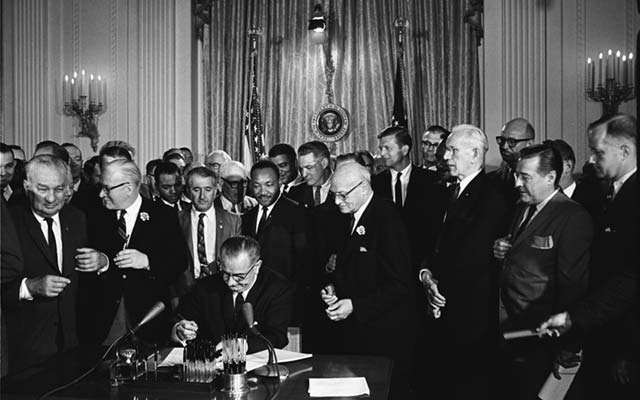 After years of blocking such legislation when he was in the Senate, President Lyndon Johnson signed the Civil Rights Act of 1964, completing a legislative task begun by his predecessor, the slain President Kennedy. 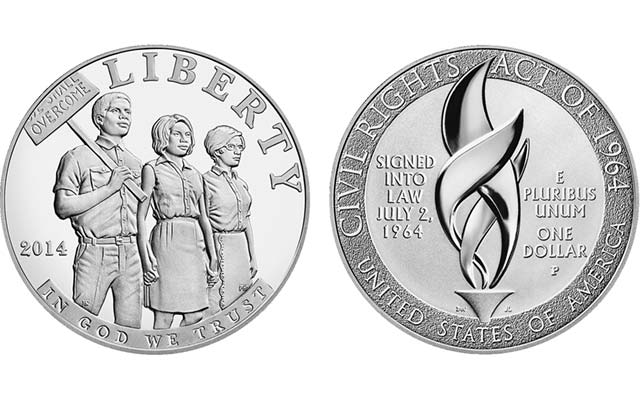 A 2014 silver dollar marks the 50th anniversary of the landmark Civil Rights legislation.

Editor's note: The following is the final piece in a series of posts on the historical record that can be tracked through U.S. coins. The subject is the cover story of our July monthly issue.

Though some barriers began to break in the 1940s, the struggle for civil rights would continue another two decades before the passage of the Civil Rights Act of 1964.

The landmark legislation enacted on July 2, 1964, outlaws discrimination based on race, color, religion, sex, or national origin. It requires equal access to public places and employment, and provides for enforcement of school desegregation of and voting rights. It did not end discrimination, but it did open doors to further progress.

President Lyndon B. Johnson signed the law into effect, following the passage of the measure (which was initially suggested by President Kennedy in 1963) in the wake of Kennedy’s death.

An irony of Johnson’s role in the legislation is that, during his first 20 years as an elected official, he had vehemently opposed every single piece of Civil Rights legislation, thwarting efforts in Congress for pragmatic reasons (i.e., to be re-elected).

The act was supplemented with additional powers to further advance the cause, strengthening enforcement.

The U.S. Mint in 2014 issued a commemorative silver dollar marking the 50th anniversary of the legislation.

Three protestors, including one carrying a sign with the anthem of the era, WE SHALL OVERCOME, appear on the obverse, while a flame of liberty burns on the reverse.

The canvases of America’s coinage designs reflect a broad and changing landscape.

Themes, people and objects celebrated on the coinage each tell a piece of the story of the American experience.

The events and moments you wish to celebrate through coinage are up to you.