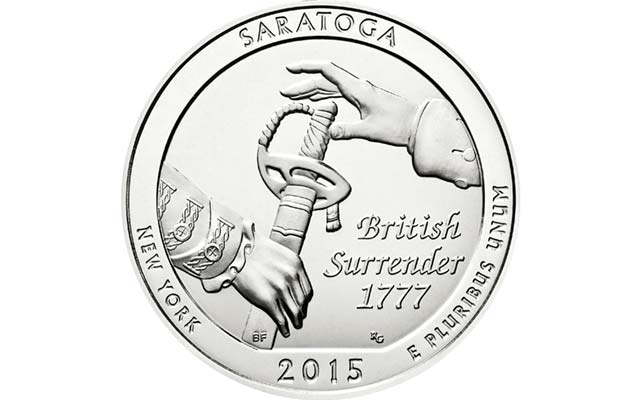 A 2015 America the Beautiful 25-cent coin marks the Battle of Saratoga and the British surrender. 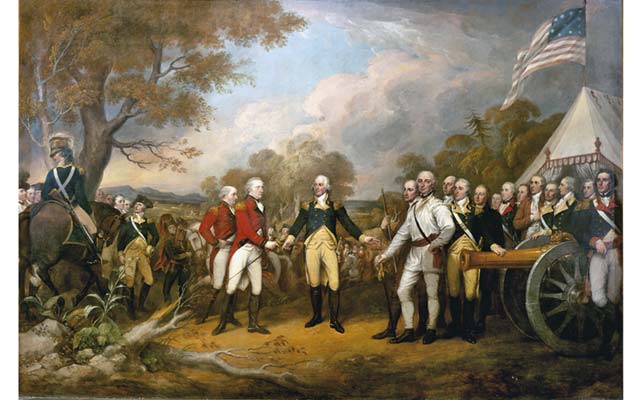 The turning point of the American Revolution is widely recognized as the Battle of Saratoga, where British General John Burgoyne surrendered to American Gen. Horatio Gates. The battle’s decision kept the British from severing New England from the rest of the colonies. This 1822 painting captures the scene.

Editor's note: The following is the third part in a series of posts on the historical record that can be tracked through U.S. coins. The subject is the cover story of our July monthly issue.

After Plymouth, a succession of settlers from around Europe crossed the ocean seeking a new land of opportunity.

Eventually, Great Britain secured the colonial right to much of North America through its victories in the French and Indian War. However, by the 1770s, the bonds between the Britain and its colonies were about to rupture.

Many of the colonists sought greater freedom from the mother country, and Britain, though victorious in the war for the continent, needed to exact additional money to pay its debts.

The American Revolution that sparked in 1775 concluded in 1783 with the Treaty of Paris, when the United States of America realized the independence it had so desperately sought.

The prize of independence always seemed precarious, but the Battle of Saratoga in the autumn of 1777 is regarded as the major turning point in the struggle. There, in New York, American forces met, defeated, and forced a major British army to surrender. This crucial American victory renewed patriots’ hopes for independence, secured foreign recognition and support, and changed the world.

The battlefield, a monument to the fallen, and the restored country house of American Gen. Philip Schuyler compose the three sites of Saratoga National Historical Park, which was established as a national site in 1938.

The Battle of Saratoga National Historic Park also features on a 2015 circulating quarter dollar in the America the Beautiful series from the U.S. Mint.

The coin’s reverse design depicts a close-up image of the moment Gen. John Burgoyne surrendered his sword to Gen. Horatio Gates, a turning point many believe marked the beginning of the end of the American Revolutionary War.