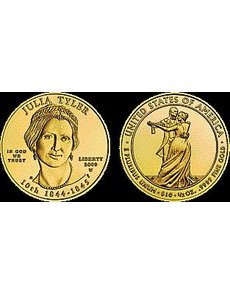 To date, mintages for the Uncirculated and Proof 2009-W Julia Tyler First Spouse gold $10 bullion coins remain the lowest of the series. Some 2011 issues, however, may unseat “Queen Julia.”

Unsurprisingly, the Julia Tyler coins carry a premium value in both certified and “raw” states.

According to the U.S. Mint, however, some 2011 First Spouse coins may be poised to give “Queen Julia” a run for her money.

Based on its weekly sales figures ending June 4, the Mint reports selling only 1,798 Lucretia Garfield and 2,092 Lucy Hayes Uncirculated coins. Similarly, low sales are being reported for Proof coins for Garfield (2,781) and Hayes (3,234).

Most of the 2011 Uncirculated and Proof coins, though, continue to remain available for purchase from the Mint. As this issue of Coin World went to press, sales have ended only for the Uncirculated Eliza Johnson coin (2,914 strikes at last report) and Julia Grant Proof coin (3,969 coins). At some point soon, the Mint will cut off remaining 2011 First Spouse coin sales, anticipating the 2012 coins, though no release dates for these have been announced.

When buying or selling First Spouse coins, collectors should keep in mind that comparative rarity does not always translate into a significant premium. For example, an Uncirculated 2009-W Margaret Taylor coin (3,430 strikes) graded MS-70 by Numismatic Guaranty Corp., sold for $911.99 in a June 24 eBay auction. Three days earlier, an Uncirculated 2007-W Martha Washington coin (17,661 strikes), also graded MS-70 by NGC, sold for $979.95 — over $67 more. Since 2008, the second year of the program, no First Spouse coin, Proof or Uncirculated, has exceeded sales of 8,000. In early 2010, in response to falling demand, the Mint lowered the maximum mintage for the series from 20,000 strikes each to a 15,000-total strike limit, inclusive of both Uncirculated and Proof strikes. ¦