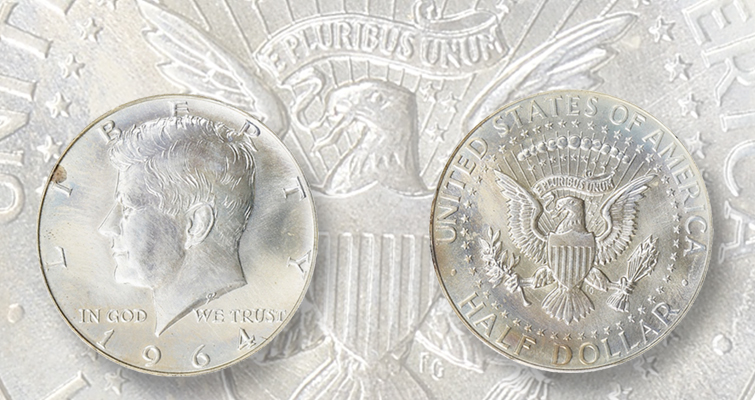 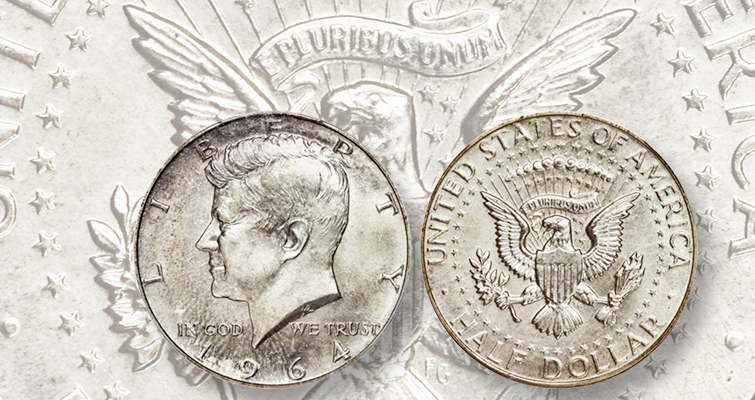 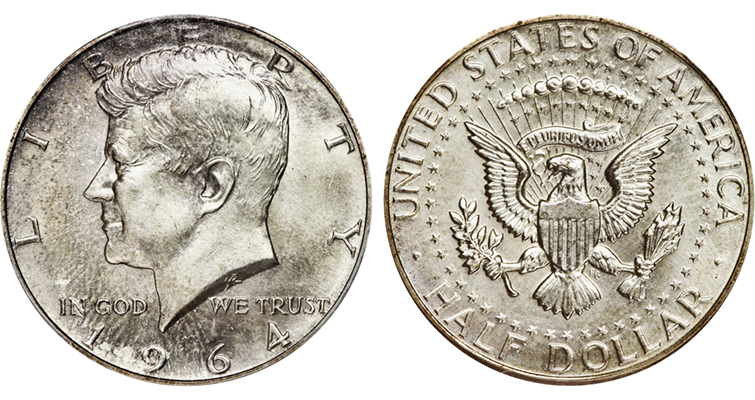 All SMS 1964 Kennedy half dollars were struck from a single pair of dies. The several die markers include “on the obverse, a tiny apostrophe-shaped lump of extra metal protruding from the bottom edge of the crosslet of the 4 in the date."

Perhaps a dozen 1964 SMS half dollars are known, and the previous record for a comparably graded example was $47,000, set at a 2016 Heritage auction.

It’s been a busy couple of weeks for rare 1964 Kennedy half dollars with a Special Mint set finish that is distinct from the Proof and circulation strikes regularly issued that year.

What was certified and cataloged as an SMS (as the “Special Mint set” coins are often called) finish 1964 Kennedy half dollar graded Specimen 67 by Professional Coin Grading Service brought $108,000 at Heritage’s April 25 Central States Numismatic Society Platinum Night auction. Two weeks later another example — also graded Specimen 67 by PCGS — sold for $87,187.50 on May 12 at a GreatCollections online auction.

The sale of one coin for an unexpectedly high price often brings out other examples from sellers hoping to ride the wave of attention. That the second offering brought less than the first makes sense. After all, presumably there is one less bidder in the marketplace vying for an example when the second one comes around.

The market for these 1964 SMS issues has exploded in the past decade, as registry sets have focused attention on modern era issues and major grading services have legitimized the 1964 SMS strikings. The previous record for a comparably graded 1964 SMS half was $47,000, set at a 2016 Heritage auction, and to put the issue’s quick rise in perspective, PCGS Specimen 67 examples sold for $16,100 and $6,037.50 at Heritage auctions in 2010 and 2008, respectively.

The SMS 1964 Kennedy half dollar is a puzzle. The Special Mint sets were sold by the Mint from 1965 to 1967, and it’s not clear how some sets of 1964 coins with the satiny surface texture and sharp detail characteristic of the SMS coins left the Philadelphia Mint. Five-coin sets of 1964 SMS finish coins emerged in Stack’s auctions in the 1990s, and Heritage writes, “It is believed that most of those sets came from New York coin dealer Lester Merkin.” The 1991 offering of a five-coin set called them “Choice Brilliant Uncirculated” with evidence of die refinishing at the Mint, with the cataloger concluding, “We suspect that these were struck as an experiment to determine the sort of finish the Mint would use from 1965 to 1967.”

All of the SMS 1964 Kennedy half dollars are known to have been struck from a single pair of dies. Heritage identifies several die markers including “on the obverse, a tiny apostrophe-shaped lump of extra metal protruding from the bottom edge of the crosslet of the 4 in the date; on the reverse, a discernible die polishing line connecting the bottom tip of the lower crossbar of the (O)F to the A(MERICA), and another connecting the same crossbar of the (HAL)F to the rim near the D(OLLAR).”

Perhaps a dozen are known, and both the Heritage and GreatCollections half dollars were offered as part of 5-coin sets, with each coin sold as an individual lot.