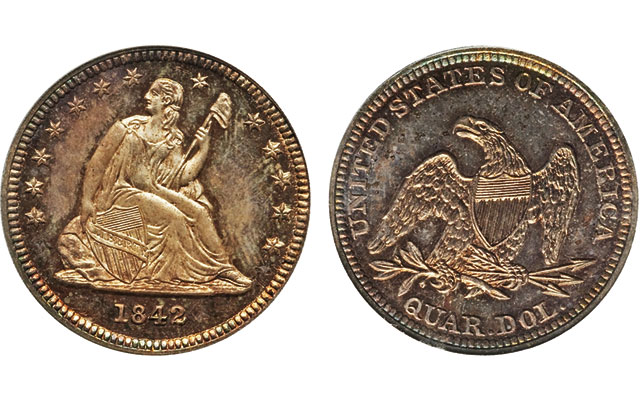 At $282,000, this Proof 65 1842 Seated Liberty, Small Date quarter dollar was tied with another coin as the most expensive in the second Gardner auction.

The two most expensive coins in Heritage's second auction of the Eugene Gardner Collection, which took place in New York City on Oct. 27, 2014, each sold for $282,000. The auction realized nearly $14 million in total. (For more highlights, see "What's the price of perfection?"  and "Ten 1796 Liberty Cap large cents show depth of collector's holdings.")

The first was an 1842 Seated Liberty, Small Date quarter dollar graded Proof 65 by PCGS. It is the second finest known of seven for the date, and the offered example was part of the Eliasberg Collection where it was described as “one of the greatest of all American classic silver rarities.”

When last offered as part of Heritage’s 2013 sale of the Greensboro Collection it sold for $258,500. The digits of the date are much smaller than those used on regular-issue Seated Liberty quarter dollars in 1842 and the Small Date design is seen only on Proof strikings. However, Proof quarters of this year come in both Large and Small Date versions.

The issue is popular with type, date and variety collectors. Two obverse dies struck 1796 half dollars: one with 15 stars and another with 16 stars. The Draped Bust, Small Eagle half dollar was produced for just two years and of the 3,918 pieces struck, perhaps 400, or so, survive today.