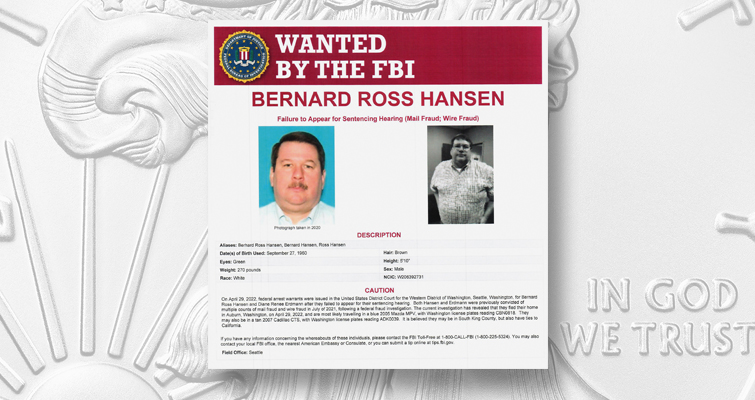 After failing to appear in court in April, the FBI began a manhunt for Bernard Hansen and Diane Erdmann, and the two were arrested by the FBI in Port Hadlock, Washington, in May.

Wanted posters courtesy of the FBI.

The former president and CEO of Northwest Territorial Mint, a now-bankrupt company dealing in precious metals, was sentenced June 6 in U.S. District Court in Seattle to 11 years in prison for 14 federal felonies resulting from a Ponzi-like scheme that defrauded customers of millions of dollars.

Bernard Ross Hansen, 61, aka Ross B. Hansen, was convicted of multiple counts of wire and mail fraud after a four-week jury trial in July 2021.

Hansen’s co-defendant and partner, vault manager Diane Renee Erdmann, 49, was convicted of 13 counts of wire fraud and mail fraud. She was sentenced to five years in prison.

This was the second scheduled sentencing hearing for the two, after they failed to show up for their late April court date and attempted to flee. The pair were arrested by the FBI in Port Hadlock, Washington, in May.

Prosecutors increased their sentencing recommendations for both Hansen and Erdmann to reflect the 11-day manhunt that followed their failure to appear. When arrested in the small town of Port Hadlock on the Washington’s Olympic Peninsula, officials said, “Ms. Erdmann and Mr. Hansen acquired a new vehicle, armed themselves with three loaded guns, and evaded supervision. Ms. Erdmann’s conduct shows a lack of respect for the Court and the law enforcement authorities that she knew would attempt to find her. Recent events have shown that Mr. Hansen also presents a danger of violence. When he was apprehended by law enforcement in Port Hadlock, he was traveling with three loaded firearms in reaching distance of the front seat of his vehicle.”

At the sentencing hearing U.S. District Judge Richard A. Jones said, “The entire means of operation was nothing more than a fiction…. You were a wrecking ball building your empire. (The victims) trusted you and had faith in the snake oil you were selling; that faith was met with manipulation and deceit.”

According to records in the case and testimony at trial, Hansen and Erdmann defrauded Northwest Territorial Mint customers in a variety of ways. Evidence at trial showed that Hansen and Erdmann lied about shipping times for bullion, and used customer money to expand the business to other states and to pay their own personal expenses. As a result, the company lacked enough assets to fulfill customer orders and used new customer money to pay off older customers in a Ponzi-like scheme. In total, over 2,500 customers paid for orders, or made bullion sales or exchanges, that were either never fulfilled or never refunded. The total loss to these customers was more than $25 million.

In addition to the bullion customer fraud, the evidence at trial demonstrated that Hansen and Erdmann defrauded customers who paid NWTM to safely and securely store bullion in the NWTM vaults. Evidence and testimony at trial showed that Hansen and Erdmann used this bullion that was supposed to be in secure storage to fulfill other orders. In April 2016, the NWTM vaults were inventoried and all or part of the stored bullion for more than 50 customers was missing. The missing bullion was worth more than $4.9 million. 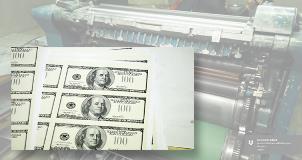 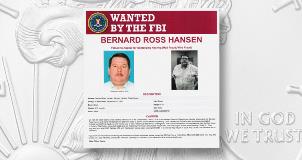