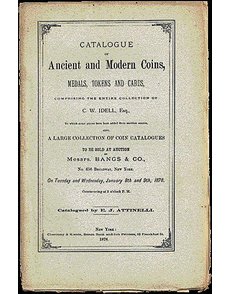 Last month, we discussed Emmanuel Joseph Attinelli’s Numisgraphics, the indispensable bibliography of American numismatic literature from its beginnings through 1875.

Three mysteries, however, still swirl around this great book.

First: Why were sales of the original 1876 edition of Numisgraphics so dismal?

Second: 10 special “large paper” copies were published. Where are they today?

Third: What happened to the photolithographs Attinelli made of the Watkins Broadside (the earliest coin auction that he could find)?

Only the first mystery has been solved; the other two still confound us.

Regarding that first question, the market of those interested in books about coin books was smaller than the market for those interested in books about coins. As John W. Adams observes in his Foreword to the 1976 Quarterman reprint of Attinelli’s work, Attinelli made matters worse by choosing to distribute Numisgraphics himself, thus foregoing a publisher’s marketing budget.

Numisgraphics received only one blandly positive review. All of these factors combined for dismal sales. Only about 50 copies were printed in 1876, and estimates of survivors range from Adams’ less than a dozen, to Charles Davis’ reckoning, in his American Numismatic Literature, of less than 25.

As Adams notes, the original edition was recognized as a rarity almost from the moment of publication; it began appearing on collectors’ want lists as early as 1879.

Regarding the second question, seven words are printed at the bottom of the Attinelli’s Preface to Numisgraphics: “Ten copies printed on large tinted paper.”

Large paper copies of numismatic books and catalogs are easily identified, because all of the margins are noticeably broader than they are in regular editions. Numismatic bibliophiles have avidly searched for these 10 special copies for decades, but none — not one — has ever been found.

A note immediately follows: “Ten copies of the above were printed (at $10 per copy) on fine large paper either of the 4 copies remaining unsold can be had by addressing the author.” The term “8vo” is a standard abbreviation for the “octavo” book size of 6 inches wide and 9 inches high. “Royal octavo” is typically 6½ inches by 10 inches in dimension.

Clearly, large paper copies were printed, and at least six of them were sold for the then princely price of $10. How could such expensive and special books simply vanish?

Regarding the third question, according to lot 921 of the Idell sale, Attinelli printed 30 photolithographic copies of the Watkins Broadside, one of which he used as Numisgraphics’ frontispiece.

Today, only one copy is definitely known to exist, in the collection of the American Numismatic Society.