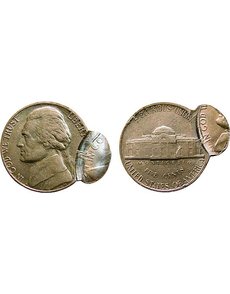 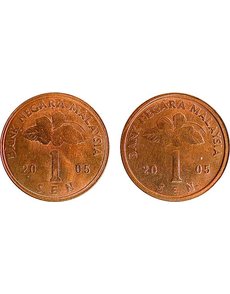 This 2005 Malaysia 1-sen coin has two obverse designs (one flattened). It is a double-struck pseudo-mule.

Among the rarest of all errors are two-headed and two-tailed mules (mules are coins struck by mismatched dies).

These mules owe their existence to the accidental or intentional installation of two hammer or two anvil dies. But at least three other pathways can lead to a two-headed or two-tailed coin, and none require mismatched dies. One pathway is illustrated by an undated Jefferson 5-cent coin provided by Scott Taylor.

The first strike was normal. What initially looks like a second strike is 90 percent off-center and carries raised, normally oriented obverse design elements on each face. The two designs are almost perfectly aligned in vertical space.

Numerous clues demonstrate that the off-center designs were not generated by a muled pair of obverse dies. Next to the centered obverse face, the off-center strike is strongly convex and shows a matte texture. Design elements on this face are slightly expanded and flattened. All these clues indicate that this area was struck against another planchet. Finally, die markers are identical on the centered obverse face and the crisper of the two off-center obverse designs.

Pseudo-mules are much more compelling and deceptive when the two obverse or reverse designs are complete. The illustrated 2005 Malaysia 1-sen coin is a pseudo-mule that carries the obverse (hammer die) design on each face. Two steps were necessary to create it.

In the first step, two planchets were placed together in the collar and struck. The top coin was left with a die-struck obverse design and a featureless reverse face. Such an error can occur naturally and is called either a “uniface strike” or a “full indent.” The coin was then flipped over and placed back into the collar on top of a fresh planchet. When the two discs were struck, it left the top coin with a fresh die-struck obverse design on the original featureless surface. The original die-struck obverse face was flattened from where it rested on the planchet during the second strike.

Many similar 1-sen pseudo-mules emerged around this time period and are clearly intentional errors. Several have been erroneously encapsulated by Professional Coin Grading Service as double-obverse mules.

A double-reverse pseudo-mule can be created in the much the same way. One simply uses the bottom member of an in-collar uniface pair. Flip it over, place a fresh planchet on top it, deliver a second strike, and you’ve got two reverse designs (one flattened, of course).

A pseudo-mule doesn’t even require two uniface strikes in sequence. A simpler scenario involves a normal coin flipping over and landing perfectly on top of (or beneath) a fresh planchet. The two discs are then struck together in- or out-of-collar. The increased effective striking pressure generated by two stacked discs is sufficient to obliterate the original design on the face struck directly by one of the dies.

This kind of pseudo-mule error will generate a perfectly centered, flip-over, first-strike brockage on the planchet that rests against it.

A final sequence of events requires only a single strike to be delivered to the planchet that will become the pseudo-mule. In this scenario, a coin with an in-collar, first-strike brockage flips over and lands beneath or on top of a fresh planchet. When the two discs are struck together (in- or out-of-collar), the brockaged coin acts like a die and generates a raised, normally oriented design — a counterbrockage. I have not yet encountered this type of pseudo-mule.

However it’s produced, a pseudo-mule will have the raised design flattened on one face. If struck out-of-collar, it will often assume the cupped shape of an anvil or hammer die cap, with the design on its “working” face grossly expanded and distorted.

Have any domestic pseudo-mules been mistakenly encapsulated as true mules? Possibly. A third encapsulated two-tailed quarter dollar is known, but this one was double struck in-collar, the second time against an unstruck planchet. One face is correspondingly flattened and distorted. While Numismatic Guaranty Corp. claims the coin was struck by two reverse dies, its appearance is equally consistent with that of a two-tailed pseudo-mule produced in a manner described earlier.