Two gold coins in Paramount Collection could bring $1 million each 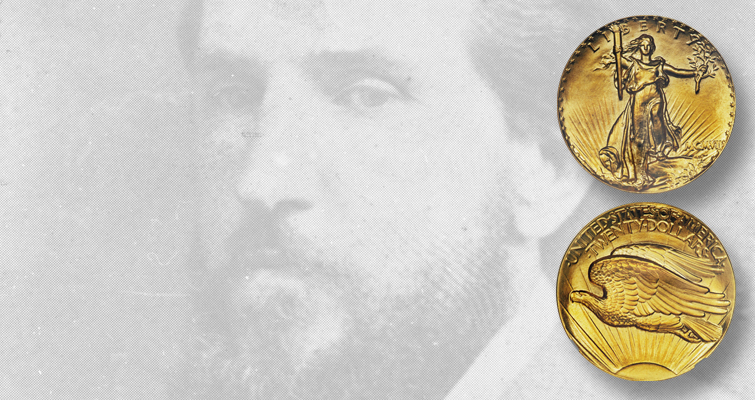 A Proof 68 1907 Saint-Gaudens, Ultra High Relief $20 double eagle from the Paramount Collection highlights Heritage’s Feb. 17 to 21 auctions in Dallas. A portrait of the sculptor taken in Paris around 1880 shows the sculptor when he was around 30 years old.

Images courtesy of Heritage Auctions and Library of Congress. 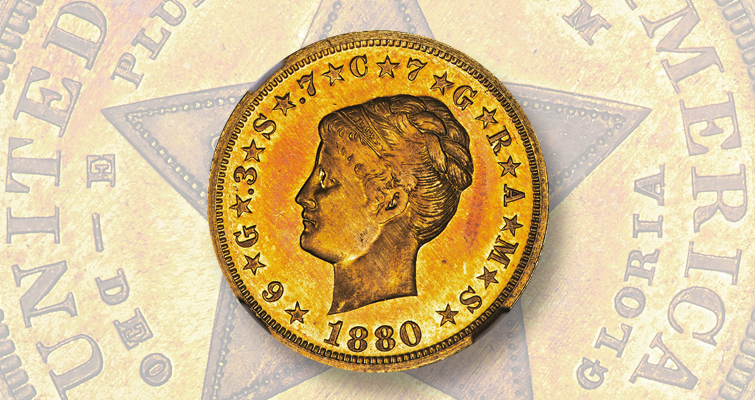 An 1880 Coiled Hair Stella gold $4 pattern graded Proof 67 Cameo by NGC is among the finest of nine known.

Heritage is offering two legendary U.S. gold coins that should crack the $1 million level at its Feb. 17 to 21 Signature Auction in Dallas. Both are from the Paramount Collection.

Heritage notes that, “comprised nearly entirely of large-format gold coins and trophy coins, the Paramount Collection’s highlights are many and expansive.”

A 1907 Saint-Gaudens, Ultra High Relief, Normal Edge Lettering $20 double eagle graded Proof 68 by Numismatic Guaranty Corp. will be presented on Feb. 19. It is one of approximately 20 known examples that survive of an issue widely considered America’s most beautiful coin.

The Ultra High Relief coins are considered the most fully realized examples of sculptor Augustus Saint-Gaudens and president Theodore Roosevelt’s collaboration to create a coin design that would rival the most magnificent Greek coins.

The stunning but labor-intensive coins were not well-suited to regular production. Heritage explains, “Each coin required seven blows from the medal press, at a pressure of 150 tons, to bring up all the details of the design. The planchets had to be annealed and cooled in a nitric acid dip between each blow from the medal press.”

Edge lettering was imparted on the seventh strike using a three-part, segmented collar and several variants of the edge lettering are known.

A modified High Relief design was used for 12,367 coins struck for circulation later that year, and ultimately the relief was lowered again until the conclusion of the series in 1933.

Heritage calls the offered coin “a stunning work of art.” The definition is razor-sharp, as one would expect. Heritage adds, “Repeated annealing and cooling in nitric acid during the striking process removed the copper alloy from the surface of the coin, leaving a thin layer of pure gold.”

Research from Roger Burdette indicates that the offered coin comes from either the second striking period of the Ultra High Relief issues that took place between March to July 1907, or the third striking period that happened on the last day of 1907.

It is called the Norweb Specimen after former owners Emery May Holden Norweb and R. Henry Norweb Jr. and was re-introduced to the marketplace in 1997 at Bowers and Merena’s sale of the Norweb Collection where it realized $660,000.

Another rare Proof gold issue of unmatched desirability is an 1880 Coiled Hair Stella gold $4 pattern, listed as Judd 1660 in the pattern reference and graded Proof 67 Cameo by NGC.

The gold $4 pattern denomination was an attempt to create a coin that could compete globally with popular gold trade coins, with two designs struck in both 1879 and 1880. A reported 425 1879 Flowing Hair dollars were struck as part of the proposal, a type of “salesperson sample” so to speak.

Central to promoter John Kasson’s argument for issuing the Stellas was that certain European gold coins were worth exactly the same and were interchangeable. Heritage writes in its description, “He wanted the same for the United States, a coin of ‘exact value’ to its European counterparts. In other words, Kasson wanted a coin worth $3.88, which was what the Austrian eight florin was worth in U.S. dollars. Since $4 does not equal $3.88, a four dollar gold piece would never improve matters.”

The 1880 Flowing Hair $4 Stellas are much rarer, as are 1879 and 1880 Coiled Hair Stellas and Heritage writes, “Ownership of an 1880 Coiled Hair stella is a mark of distinction, not just for those who specialize in the four dollar gold set or in the larger pattern series, but for anyone involved in American or even international numismatics.”

The Coiled Hair issues are especially mysterious since U.S. Mint records of the period are unclear as to the number struck and the purpose of them. Even the designer is debated, with tradition ascribing the Coiled Hair design to George Morgan, while Burdette’s research leans toward Charles Barber being the author of both the Flowing Hair and Coiled Hair designs.

Just 13 1879 Coiled Hair and nine 1880 Coiled Hair Stellas can be accounted for today, and the offered example is among the finest of these. Its most famous owner was Louis E. Eliasberg Sr. This example was part of Bowers & Ruddy’s 1982 auction of his collection where it realized $99,000, graded by the auctioneer as Choice Brilliant Proof 65. Bowers and Ruddy called it “a true numismatic classic the importance of which cannot be overemphasized.”

In its subject offering, Heritage explains the weakness visible in the details of the high grade survivor, writing, “Parallel striae are present on both the obverse and reverse, as always. Although these have been called adjustment marks in the past and some scholars have tried to associate them with restrikes, they are simply a result of inadequate striking pressure failing to obliterate planchet imperfections caused by the draw bench. That same lack of pressure explains softness over the central portion of the design.” These light striae are seen on all known examples.

Collectors also have the choice of two different Judd 1635 1879 $4 Flowing Hair patterns in the Feb. 19 session: one graded Proof 63 by NGC and another from the Paramount Collection in NGC Proof 65 Cameo. 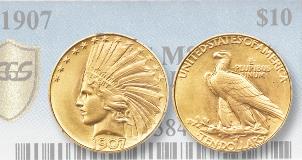 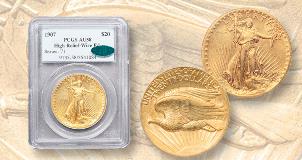 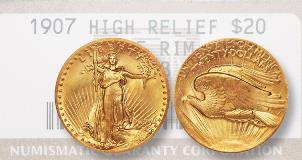