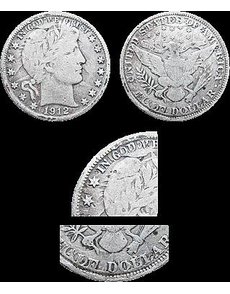 A tremendous die clash preceded the strike that generated this 1912 Barber half dollar. Only the most deeply recessed portions of the die face failed to pick up the full complement of design elements from the opposite die. 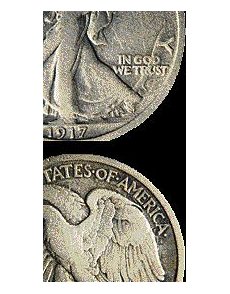 Two die clashes are documented on this 1917 Standing Liberty half dollar. The strongest clash marks are in the southeast quadrant and represent a tilted die clash.

“Clashed dies” is a relatively common form of die damage that occurs when dies smack into each other.

It requires two malfunctions: (1) failure of a planchet to be fed into the striking chamber, and (2) loss of minimum die clearance (the safety margin that keeps the dies from touching in the case of a complete planchet misfeed). A loss of clearance can, in turn, be due to (1) dies that have fallen out of adjustment, (2) a loose mechanical linkage (knuckle joint) or (3) a loose die that continues its descent even after the knuckle joint has reached maximum extension.

Heavy die clashing is rare, especially in thick issues like half dollars. With such coins, the minimum die clearance can be set at a greater distance, and the acceptable tolerances of that clearance made more generous. The greater thickness of the planchet means that you’ll get a strong strike even if there’s a slight increase in minimum clearance. And because you can start with a greater clearance, a spontaneous reduction in that clearance doesn’t necessarily mean a clash will occur when a planchet fails to be fed into the striking chamber.

The 1912 Barber half dollar shown in the accompanying photos shows the strongest clash imaginable. Every detail of each die face was transferred to the field and shallowly recessed areas of the opposite die face. All of the peripheral design elements, including the dentils, are present in the form of incuse, mirror-image impressions. An equally severe clash on a 2000-P Jefferson 5-cent coin was discussed in the March 22, 2010, Collectors’ Clearinghouse.

This specimen was found in a bag of “junk silver” purchased over a year ago on the online auction site eBay by Daryl Richardson. Richardson later placed the item on eBay where Neff purchased it.

The impact necessary to create such a complete clash must have been tremendous. It’s a wonder the dies did not shatter on impact. Barber coinage shows little evidence of die convexity; in other words, the die face is almost flat. This facilitated complete transfer of the design. Tom DeLorey, in comments posted on the Collectors Universe U.S. Coin Forum (http://forums.collectors.com/messageview.cfm?catid=26&threadid=851623) speculated that the impact may have further flattened the convexity of the two die faces.

Another contributing factor may have been abnormally soft dies that were tougher than typical dies, which are relatively hard and brittle.

DeLorey noticed a small elevated area below GOD WE that is demarcated below by a bilevel (stepped) die crack. The clash marks end abruptly at this die crack. This appears to be an area where the die face sank in prior to the clash (a die subsidence error). This might constitute additional evidence that this die at least was not quite as hard as a normal die and therefore prone to deformation.”

Neff’s second specimen — a 1917 Walking Liberty half dollar — shows a less complete set of clash marks that are quite strong and asymmetrically developed. He acquired it about two months ago in an eBay auction. The southeast quadrant of the obverse face (and the corresponding northeast quadrant of the reverse face) shows a very strong tilted die clash (vertically misaligned die clash).

At the time of the impact, the southeast pole of the obverse (hammer) die was tilted down toward the anvil die. This produced a very strong clash of AMERICA on the obverse face, along with the back of the eagle’s wing. Corresponding portions of the obverse design were transferred to the northeast quadrant of the reverse face.

Some faint clash marks can be seen to the left of Liberty, but these were left by a much weaker clash that occurred before or after the tilted clash, when the obverse die face was perfectly parallel to the reverse die face. These clash marks are not properly aligned with the incuse, mirror-image letters of AMERICA, proving that they were produced by a separate impact.