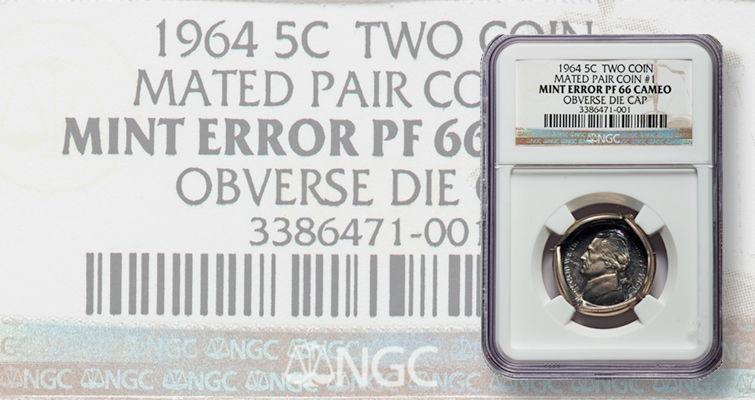 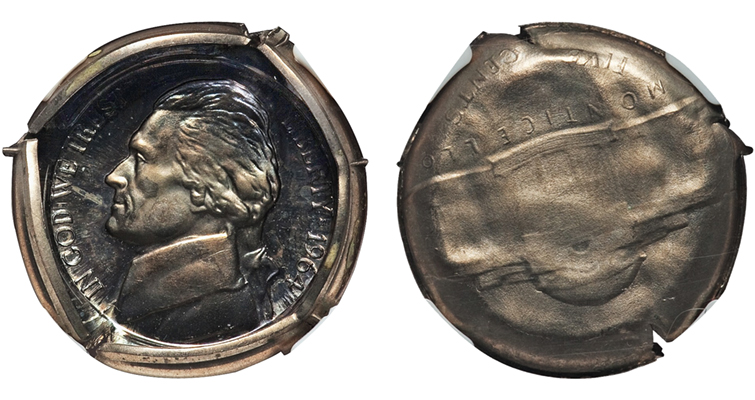 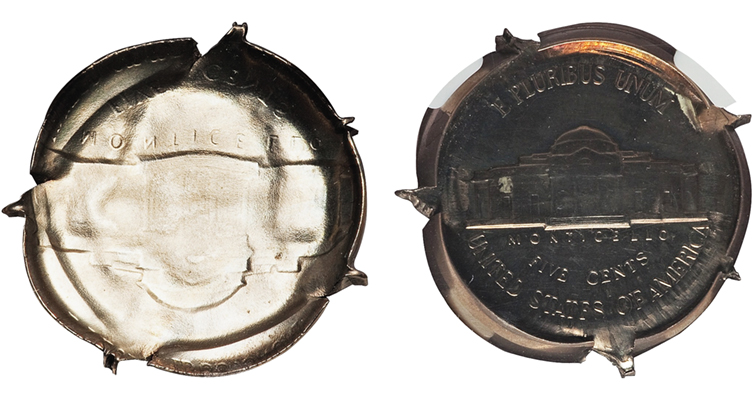 A pair of Proof 1964 Jefferson 5-cent coins beat the odds. Struck together, they stuck together and now are offered as a single lot in Heritage’s April 26 to May 2 auction.

The coins form what error specialists call a mated pair. The coins, as the term suggests, were struck together. Even more important, the coins apparently remained together after they were removed from the coining press and through the various steps that followed.

Interestingly, as Proof coins, they should have been immediately detected and rejected.

The obverse face of Coin #2 has a faint impression of Jefferson’s portrait, as transmitted by the obverse die through the die cap that Coin #1 became. In addition, the obverse face of Coin #2 has a distorted brockage image formed by the fading remaining image on the reverse of Coin #1. (A brockage image is both incused and a mirror image of the design on the surrogate die formed by the reverse of the first die cap.) Since the die cap that Coin #1 had become had struck several pieces before this one, the reverse design had begun to distort and spread out under the pressure incurred during those strikes.

Die caps, brockage pieces and the related capped die strikes on circulation strikes are of varying rareness, though none is exactly common. Mated pairs of circulation strikes that are found together are even rarer, since the chaos of the post-minting process that ends with the coins being dumped into canvas bags for transport to banks make it likely that the individual pieces of a mated pair will be forced apart and enter circulation separately.

Proof versions of such errors are uncommonly rare and should have been detected by the press operator and the inspector, given the hands-on approach and closely supervised minting processes involved in the production of Proof coinage.

The 1964 Proof sets were the last of their kind in terms of packaging. As reported in United States Proof Sets and Mint Sets by Ron Guth and Bill Gale, “Each coin was sealed in its own compartment between two sheets of flat pliofilm ... and the flat pack was then inserted into a mailing envelope with a card.”

A mated pair of Proof 1964 Jefferson 5-cent coins in the same compartment of the pliofilm should have stood out in a final inspection of the set before it was inserted into the envelope, and yet this pair escaped detection. However, it is not unknown for even Proof coins with major errors to escape a Mint facility, through both legitimate and illegitmate means.

Both coins in the Heritage auction are graded Proof 66 Cameo by Numismatic Guaranty Corp. Bidding is to begin on April 7 or thereabouts. 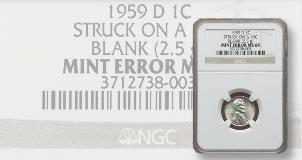 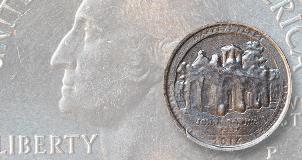 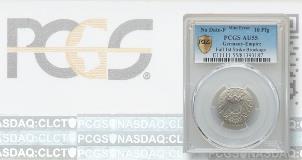