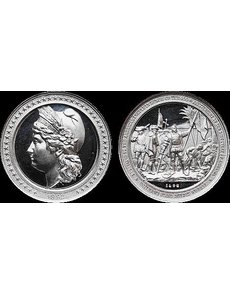 Should a collector remove two 1892 Liberty Head so-called dollar medals from a frame? If he wishes to confirm they are authentic, the answer is “Yes.” Shown is a Proof 66 Ultra Cameo example from a Dec. 11 Heritage auction.

I bought a framed, two-piece set of the 1892 Liberty Head Columbian Exposition commemorative so-called dollars at an antique auction.

The frame has a wax seal on the back that reads “Artifacts Limited.” I have looked online and cannot find a two-piece set of these so-called dollars that are framed.

I was thinking about sending them out to be graded or is it better to leave them in the original frame with the wax seal? Could you help me determine their value?

While the decision to remove the medals from the frame is entirely up to Mr. Burch, some factors may guide him in making that decision.

To be certain that the medals are authentic, they should be examined, graded and encapsulated by a reputable third-party grading service. Before spending the time and money to do so, however, it is a good idea to estimate their condition, composition and overall desirability to determine if their value matches the cost of having them authenticated.

From the photos Mr. Burch submitted to “Readers Ask” (not illustrated) it appears that the two medals are similar to the piece cataloged as HK-222 in So-Called Dollars by Harold E. Hibler and Charles V. Kappen.

The HK-222 so-called dollar medal is composed of aluminum and was struck in both Proof and Uncirculated finishes. Mr. Burch’s pieces appear to have a Proof-like finish and may be Uncirculated.

As for the potential value of such pieces, auction results are a good resource. On the high end, an HK-222 so-called dollar, graded Proof 66 Ultra Cameo by Numismatic Grading Corp., sold in a Dec. 11, 2011, Heritage Auction Galleries sale for $1,035.

Whether the pieces have a potential value of hundreds of dollars or even more, the first step to establishing their approximate value is having them authenticated.

If Mr. Burch does wish to have the his pieces authenticated and encapsulated, it is advised that he contact a grading service beforehand for advice regarding removing the pieces from the frame and the proper packaging for shipment to the grading service.

The owner may also wish to consult with Numismatic Conservation Services, which can conserve (remove the medals from the frame and if needed, remove any residue from the medals or address other problems) as well as authenticate the pieces.